Lentran Loop - Light at
the End of the Tunnel 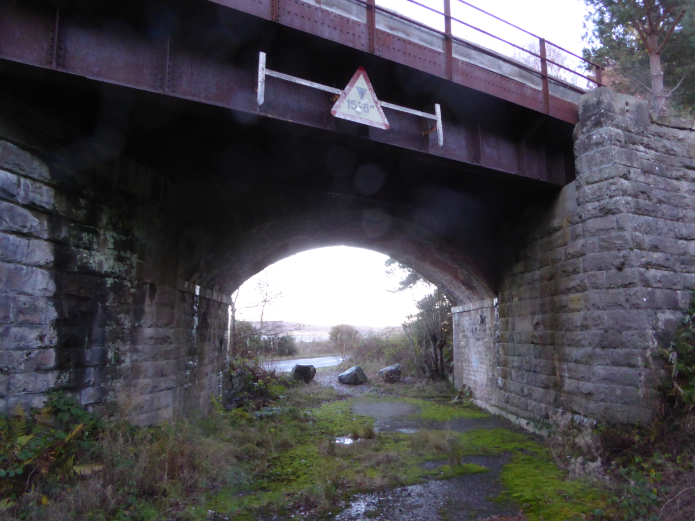 An unusual view of the Far North Line - at Phopachy, near Lentran - nearest the camera, the metal girder bridge from the widening to double track of 1913/14, and behind, the original stone arch from 1862.
Richard Ardern

At the end of the nineteenth century late running on the Highland Railway was a major problem. The cash-strapped company did its best to remedy the situation by widening significant lengths of its route to double track and installing many new passing loops. The last section of its route to be widened was the six miles from Clachnaharry to Clunes which was completed in 1914.

The HR's problems have a familiar ring to them and one can only imagine their thoughts if they'd been told that after only 52 years their vital work would be undone.

The 1960s was a time when many felt that railways had had their day and there was a view that somehow they should not make a loss. This way of thinking now seems rather quaint - a bit like being upset that pavements require financial support.

By the 1990s it was apparent that railways were becoming essential and studies began to be made to ascertain what needed to be done. The imperative of countering climate change has added impetus to the process.

The first mention by FoFNL of the need for work on the erstwhile double-track section of the FNL was at the AGM in 2004:

On the Far North Line, once Invernet is in place, the most pressing need for an additional loop would be in the Lentran/Clunes area. This would be essential to allow further freight or passenger traffic growth but also invaluable at times of late running.

In 2006 the Highlands and Islands Enterprise Highland Rail Room for Growth study was published, suggesting a more radical approach:

In order to improve timetable planning and performance (particularly if trains are running out of course) it is recommended that consideration be given to re-instating the section of double line from approximately the 2 milepost (west of Clachnaharry) to Clunes at 7.6 miles. This section was singled during rationalization in the 1960s. This would mean installation of colour light signalling and track circuit block to Clunes or a suitable point further north, controlled from Inverness panel. [From that point northwards, RETB signalling would apply.]

An estimated total cost of £15m at 2006 prices for doubling the whole six miles seems like a bargain when you consider the transformation to FNL and Kyle Line reliability it would achieve.

The operational slowdown imposed in 2005, adding some 25 minutes to the end to end journey time from Wick to Inverness, has caused major problems for timetabling. Lentran proved to be a major pinch point. Late running by the first train south from Wick of more than 15 minutes causes it to be held at Muir of Ord for up to a further 50 minutes to allow the northbound Wick and Kyle services to come through on the single track from Inverness.

The alternative, to delay them further, would cause delays further up the line to other trains, with a domino effect which could continue all day and cause more missed connections at Inverness.

As this is being written at the beginning of 2021 we know that Transport Scotland and Network Rail are working hard to decide exactly what level of expenditure is appropriate and affordable. Our southern neighbours are actively considering installing three dynamic (i.e. long enough for trains to pass at speed) loops on the Salisbury-Exeter line, to alleviate late-running and congestion. It would seem counter-intuitive when already spending a considerable sum, to do the job on the FNL in a less than satisfactory way.