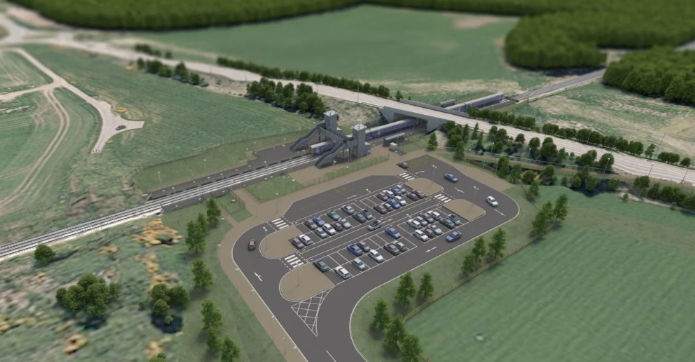 FoFNL wrote to Highland Council on 2 January giving general support to this application.

The station will be called "Inverness Airport Station" and it is 0.8 miles from the airport terminal building. HITRANS and Highlands and Islands Airports Ltd (HIAL) are investigating provision of a bus/taxi link.

In the opposite direction it will be a similar distance from the rapidly expanding new town of Tornagrain being built to the south of the A96T. There will be parking for 64 vehicles, a bus stop and provision for cyclists. Car park charging is to be discussed and agreed with ScotRail.

The station will have two platforms and thus the much-needed passing loop will be achieved to break up the 15 mile single track section between Inverness and Nairn. It will be 7 miles to Inverness and all but the short stretch of this to the Petty level crossing used to be on double track formation.

The double track will stretch from the vicinity of the helicopter base through the station as far west as the Woodend private crossing. Thus it will only be around 1,000m long. [FoFNL would have preferred to see it much longer: as far as the Norbord siding at Morayhill at the very least to increase operational flexibility. (The Norbord freight siding is not part of this application and is to be progressed independently).

It is hoped to commence construction in the late summer of 2021 and to have the station commissioned by December 2022. The increase in journey time which will result has already been offset by the reduction achieved from the opening of the new integrated Forres station and loop.

Richard Ardern
Links to pdf files of the plans.