As well as being the driving force behind the extremely successful restoration of Helmsdale Station building, Mike has also been Chairman of the North Staffordshire Community Rail Partnership since 2005.

To mark 150 years since the Kyle Line opened as far as Stromeferry, ScotRail has provided a plaque at the station. 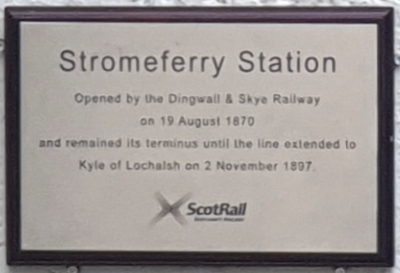 Ms D'Orsi said: "I am delighted and honoured to be appointed as the next Chief Constable of BTP. I am looking forward to building on the legacy that Paul is handing over and I would like to thank him for his dedication to policing. Whilst policing the nation's capital has given me a wealth of operational experience, I am excited to lead a force that deals with the unique nature of policing Britain's rail, underground and tram network. Working with industry partners and government to keep passengers safe, the railway moving and protect our critical national infrastructure, particularly during these uncertain times, will be very rewarding."

FoFNL hopes that the appointment being from outwith the BTP will not prove a handicap. We also hope that Ms D'Orsi soon adjusts to needing to deal with three governments - a vital benefit of keeping the BTP as a 'national' body, as rail journeys do not respect borders.