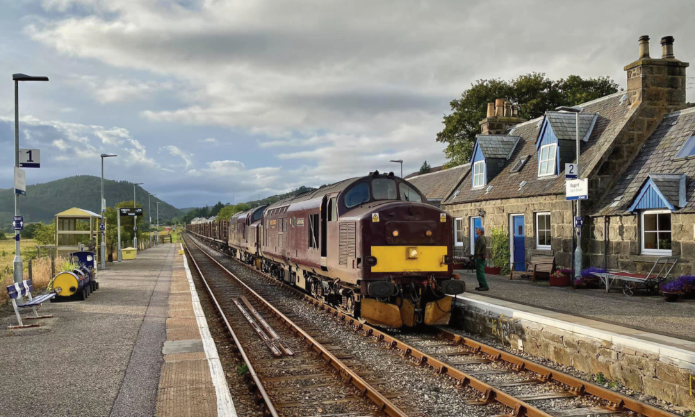 Frank Roach chats to the driver as a timber train pauses at Rogart.
Photo: Jordan Kearney

UK based rail freight specialists Victa Railfreight led the trial operation last summer of 14 trains of round wood between Georgemas Junction and Inverness, with the cargo provided by Munro Harvesting destined for the Norbord processing plant at Dalcross.

The trial was in response to discussions between the Cabinet Secretary for Rural Economy, Fergus Ewing (MSP for Inverness and Nairn) and the rail freight sector during 2019. These aimed to get rail re-established as a means of transporting some of the 10 million tonnes of timber felled each year in Scotland. The last regular rail movements of timber north of Inverness were 15 years ago.

A large number of parties from both railway and forestry industries, led by Victa, collaborated in making the trial possible. The aim of the trial was very much to prove what could be done, and to draw out any issues that need to be addressed, to make timber by rail a viable and sustainable business in the future. The date and length of the trial in August and early September were driven by operational and logistical constraints. To reflect the inherent inefficiencies of such a short-term operation, the trial received funding from the Scottish Strategic Rail Freight Fund and had the backing of the rail freight community in Scotland. The publication of the Scottish Transport Decarbonisation Action Plan just prior to the trial commencing was a timely reminder of the need for transfer of cargo from road to rail if the Scottish Government's ambitious climate change targets are to be met.

All of the planned trains operated, and performance was generally very good. The trains consisted of up to 14 DB Cargo BTA Bogie bolster wagons and two Class 37 locomotives provided by West Coast Railways. Existing paths, not required by other operators, were used, and the plan worked around already agreed engineering work commitments. Network Rail were very supportive and arranged use of the unloading facilities at Inverness, which allowed the whole train to be placed for unloading, simplifying this operation significantly. Jim Welsh at Georgemas Junction was a very flexible and supportive terminal operator, and HITRANS, through Frank Roach, supported the trial in many ways.

It was known that the BTA wagons were not an optimum long-term solution, but they were available in the timescales required, known to have been used for round wood in the past, and were suitably equipped with stanchions and securing equipment to ensure the safety of the loads, which is a key consideration for moving timber on rail. The bulk of the timber moved was "wind blown" and thus quite dry and light, and in three metre lengths, so volumes did not utilise the full carrying capacity of the wagons. This had been factored into the trial planning and was one of the inefficiencies that we anticipated when applying for the grant funding.

It had been hoped to use the last week of the trial to demonstrate the potential for other flows with Kyle of Lochalsh, Kinbrace and Lairg all considered as loading points, and Elgin as a discharge location, but for various reasons, and despite a lot of work by those involved, it was not possible to make the necessary arrangements in the timescales available.

The trial received a high level of press coverage, including a three-minute slot on the BBC Scotland News Programmes on the last day, which generated a lot of interest, both within the timber industry and the wider public. One of the trial objectives had been about speaking to potential users, and the publicity undoubtably sparked the interest of serval key players in the timber business in the Far North leading to a greater understanding of the opportunities that are available and the challenges.

A number of conclusions and learning points, some expected and some not, emerged from the trial. On a practical level, the importance of maximising wagon payloads, and the challenges of securing and keeping wagons clean, was reinforced, along with the challenges of pathing and running long trains on the constrained infrastructure north of Inverness and the need for efficient collection, delivery and handling. The importance of local support for things like wagon maintenance and repairs also became apparent, as did the need to involve everyone in the supply chain (foresters, hauliers and receivers as well as the rail companies) to ensure that overall efficiency was maximised and delivery to the customer was optimised.

Commercially, the cost of moving timber by road from forest to the railhead, and the constraints imposed by restrictions on HGV movements over local roads, are key factors that could make or break the rail offer. Both forest and lineside loading, such as has taken place in the past at Kinbrace, could offer partial solutions to these challenges. Eliminating the end delivery leg makes a significant difference to freight economics. For the traffic involved in this trial, the proposed rail connection to the Norbord plant at Dalcross will achieve this.

The fragmented nature of the forestry industry, and the rapidly changing locations of product to load arising from availability of mature timber, is a challenge for the rail freight sector which is at its most efficient moving steady volumes between the same points on a regular basis. A sustainable timber operation will require a quite different, and highly flexible, mindset in order to be both efficient and sustainable.

Finally, the backing of Transport Scotland in supporting this trial was essential. With an initial target of around 1% of the timber felled in Scotland, Victa is now discussing with TS, and other interested parties, ways in which a sustainable timber-by-rail operation could be developed over the medium term.