Niall Laybourne, FoFNL member and one of our regular photographic contributors, walked a total of 44km in February to take photos of drifts and snow clearing on the line. The longest of his three trips took him to a position near County March Summit, the highest point on the Far North Line at 216m. This 18km round trip netted a series of wonderful pictures including these two. Some more are available on the magazine companion page, as well as links to some interesting information about the Independent Snow Ploughs' history.

On this occasion the drifts were so deep that the usual 'line proving run' by a locomotive fitted with a plough was not possible. This was the first visit to this area by Independent Snow Ploughs (ISPs) since 2010.

Niall comments: The photos were taken on Wednesday 17 February from around milepost 129¾ on the Caithness side of County March Summit. This was following five days of FNL closure, and many of the drifts blocking the Class 37 on its solo line-clearing runs earlier in the week, had disappeared.

Whilst trying to clear the line by itself, 37419 couldn't get further north than Forsinard on the Saturday, due to frozen/blocked points; got stuck in drifts on a second run that night between Kinbrace and Forsinard; another impassable drift at Lairg on the Sunday night/Monday morning made it clear that a solo locomotive wasn't sufficient to tackle the remaining drifts so the ISP was summoned.

By the time the ISPs arrived the temperature had risen and snow was melting, and fortuitously I had found the longest drift they hit that day - it was around 400m long, and at least 2m deep in places.

In the top picture the train has just passed the board marking County March Summit. There was a sizeable drift at the summit itself, and the train is seen descending after that (averaging 1-in-60 for the first few kms), passing the old snow fences, and hitting another shallow drift.

From the summit to well beyond Altnabreac (and almost Scotscalder), the line here is continuously-welded rail, hence the 80mph speed limit sign for multiple units, which you can see embedded in the snow.

The plough hitting the big drift, with Ben Griam Beg seen in the background.

Seeing these photos triggered some memories from Iain MacDonald, the retired signalman on the FoFNL Committee.

I was rostered to be Pilotman* on a Sunday from Invergordon to Lairg because a lot of the signal wires had come down with the weight of snow.

The line-proving engines arrived, two class 37s and the driver was Mad Max, (just call him MM, he's deceased, but I don't want to identify him for the sake of any of his relatives). Things were not too bad as far as Tain but he was sure hitting the drifts and we only had the nose ploughs. Well, after Tain we were hitting really big drifts and the secondman and myself were exchanging glances because MM was living up to his name, I was standing between the two seats and I was sure the windscreens would be in on top of us.

As far as I understand the nose plough, the centre part is not bolted on but hangs on brackets, so there was the danger of it coming off and derailing us.

*In the event of the signalling system not working it was the lot of one of the signalmen to travel in the cab, acting as a 'human token' guaranteeing by his presence that this was the only train on the same stretch.

On another occasion snow caused the signalling equipment to fail from Invergordon to Dingwall, so I set up Pilotman working, much to the annoyance of the Traffic Inspector who later in the day declared there would be h*** to pay and he was having nothing to do with it! Well, as everything was done by the book all was well, and I remember the last trip was around 01:30 when I took the Snow Blower with the Traction Inspector on board through to Dingwall. A very uncomfortable vehicle, I don't know if any other signaller was ever Pilotman on board the Snow Blower. My car was at Dingwall and travelling back to Invergordon there were places you could hardly see the road it was drifting so bad, and I remember thinking to myself, why am I doing this?

It's disappointing to remember that in those days we were the last to stop running because of the weather, we are now the first. 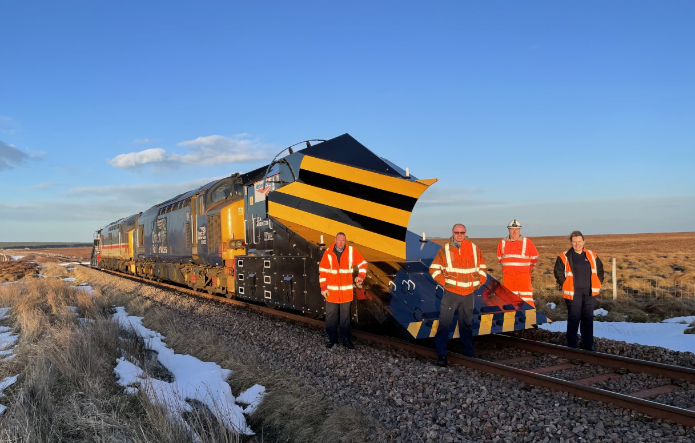