This article by FoFNL and FoWHL member Graham Atkins raises the question about electrifying scenic railways. Although it highlights the WHL it is equally relevant to the FNL. A quick glance at the railways of other countries famous for their scenic routes shows that they do not have this country's qualms about spoiling the scenery. In a large landscape the catenary and its poles are dwarfed into insignificance. This quote from Railbookers website says it all:

"In 1916, the Swiss Federal Railways decided that electrification of its rail network would use the high-tension single-phase alternating current system that is still used on all routes today. Most of the electricity for the rail network comes from clean hydro-power, making Switzerland's rail network one of the most energy-efficient in the world."

One of the presentations was from Mr Frazer Henderson, Head of Rail Policy at Transport Scotland. Mr Henderson outlined proposals in their Rail Decarbonisation Plan, published during the summer, and it was clear that rail electrification across the core of the ScotRail network was their prime solution to reducing carbon emissions from Scotland's railways.

This is of course welcome, given the already proven improvements that electrification can bring with much faster acceleration and deceleration; far greater tractive adhesion especially over steep gradients than diesel traction; and a vast reduction in carbon emissions.

However, I was surprised when Mr Henderson specifically reported that their plans did not include the electrification of the West Highland Line, while planning to go ahead with the electrification of the Highland Main Line. The reasons given were on the grounds of cost and perceived detrimental effect on the outstanding scenery through the need for the installation of catenary wires and posts.

No further detail was provided about this decision and there was no opportunity to pursue this further in the Q & A session at the end...

Certainly, the lower part of the West Highland Lines from Glen Douglas to County March Summit north of Tyndrum lies within the Loch Lomond and the Trossachs National Park. This, as with others in the UK, have been awarded the highest level of designation awarded to a national scenic area which also includes specific and scientifically diverse, rare or important environmental habitats, and worthy of the highest protection in law.

In addition, Rannoch Moor, while not within the National Park, is also protected as a Special Area of Conservation. This is linked to its special significance as a complex mix of blanket bog, transition mires and quaking bogs with associated flora and fauna.

A ready electric supply...let's use what we've got!

At the same time, The West Highland Lines also pass through an extremely mountainous landscape which has a significant concentration of Hydro Electric generating stations, some of these are situated close to the railway i.e. Inveruglas built as part of the Loch Sloy Scheme commissioned in 1950, Awe and Ben Cruachan commissioned in 1965, Bridge of Gaur as a part of the Tummel-Garry Scheme commissioned between 1928-1958 and the River Morar near Mallaig in 1948. Additionally, the former British Aluminium/Alcan smelter and Blackwater Reservoir at Kinlochleven built between 1905-9 continues to contribute to the public electricity supply, despite its aluminium smelter closing in June 2000.

These generating stations, while also helping to power the Central Belt of Scotland also provide domestic electricity to the local West Highland communities including streetlights and road signs. So, why could they not also help power an electrified West Highland Railway?

A blot on the landscape?

All the generating stations are linked by high voltage transmission power lines supported by large supporting pylons which march stridently across the landscape through Glen Falloch and Glen Dochart within the National Park, but also through Glen Spean and across Rannoch Moor. I would contend that, while useful, these are a much bigger blot on the West Highland landscape and far more intrusive than lineside catenary posts and wires contouring the railway at a much lower level and in a more discreet manner. 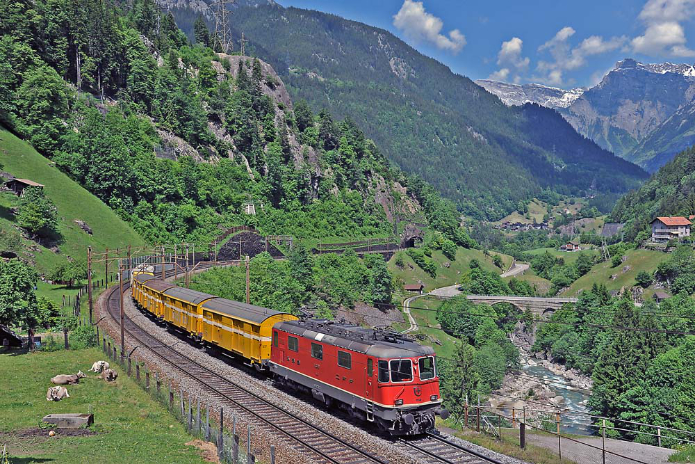 SBB Cargo Class Re 4/4" locomotive 11349 heads Train 50921 the Harkingen - Cadenazzo Postal with a single ELSA milk products Cargo van attached, on 19 May 2011, at Dangel in the Gotthard Pass.
Photograph by permission of the Swiss Railways Society © Don Gatehouse

Electric traction is far more efficient than diesel and less limiting than hydrogen or battery propulsion. It offers fast and responsive acceleration and deceleration and a much easier ability to work against gravity when moving up steep gradients, with easier access for driver handling and speed control. Surely these attributes are exactly suitable to railway operation in mountainous environments where clear benefits as taken advantage of by Swiss, Austrian and Norwegian operators? For example, the electrified mainline from Bergen to Oslo traverses the high mountain plateau of the Hardangervidda in central southern Norway - while also passing through the largest area within the country to be a designated national park.

On the West Highland journey, times could be reduced, despite the limited opportunities for track realignment to increase running speeds, and perhaps would make West Highland trains a far more attractive alternative to the much faster competing services to Glasgow provided by Scottish Citylink and of course be a huge draw for tourists.

Why electrify the Highland Main Line and not the West Highland Lines?

In contrast, Transport Scotland has announced that the Highland Main Line is to be electrified because of the clear benefits this will bring. It also runs through a highly scenic area - The Cairngorms National Park - from Killiecrankie to north of Carrbridge. And between Dalwhinnie across the pass of Druimuachdar to just north of Bruar, the railway competes with 'Super Pylons'. These highly controversial power transmission lines run for 220km from Beauly to Denny bringing hydro-electric power from the northwest Highlands to the Central Belt - the largest and highest electricity pylons in the UK.

The Highland Main Line is also competing with the immense and hugely expensive upgrade and dualling project for the A9 and the significant large-scale earthworks and land take to widen this road to dual carriageway, a large part of which is wholly within the Cairngorms National Park! How does this fit in with Transport Scotland's drive to reduce carbon emissions?

Support for the electrification of the West Highland Line

I would contend that despite the investment costs to electrify the West Highland lines, the environmental and significant journey time improvements gained would be a powerful vitamin injection for our West Highland citizens and economy - like the transformational effect that the introduction of Hydro-electric power brought to its citizens during the mid-twentieth century. I think this merits a proper wider debate...what are your thoughts?