This letter, which appeared in the January 2008 edition of Steam Days magazine, recalls another era of train travel - though not so far back that it's beyond the memory of older readers! 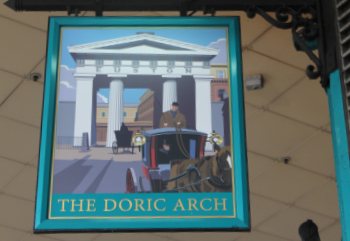 Sir: The article in the September edition of your magazine on Inverness by Jim Gordon reminded me of my summer holidays in the 1950s. From 1952 on, my parents and I travelled to Caithness in Scotland from our Berkshire home every year to visit my grandparents. After travelling up to Paddington and crossing by underground to Euston Square we walked across the road and went in by the Doric Arch to the booking-hall. We travelled mid-week to get a cheaper fare. By the late 1950s a return fare from Euston to Thurso (mid-week) was £13. 17s. 6d. After getting the tickets we travelled through the big glazed doors into Euston's Great Hall. This was before it was disgracefully pulled down. One of the things I remember about the Great Hall was the model engines each side of the doors. One year there was a transport exhibition on the first floor which I visited.

After taking an evening meal in the restaurant just off the Great Hall we walked to the platform to catch the 'Royal Highlander' which was due to leave at 7.15pm. As we had been at Euston since 5.45pm we could always get an early seat. I think the first leg of the journey was usually hauled by an LMS 'Duchess' Pacific,

but the engine I remember most was in 1958 - the prototype 'Deltic' which took us to Crewe. Travelling through the night as a young teenager seemed a very great adventure. The station names as we passed seemed like far-away places in an atlas.

After the great climb over Shap we would reach Carlisle where we would stop for quite some time. My father would go onto the platform here to get steaming mugs of tea from the tea trolley much to my mother's alarm as she would swear the train would leave without him. The abiding sound at this station was the tap, tap, of the wheel-tapper, and then, after around 35 miles, we would climb Beattock. The next stop would be a signal against us at Motherwell, then it was on through the night to Perth, arriving in the early light at 6.00am. From Perth in the daylight came the spectacular scenery of the Highlands, with the climbs over Druimuachdar and Slochd. As the line changed to single track the pace became slower, and we had to wait at some stations for an up train to pass.

At Aviemore we stopped a little longer, leaning out of the window to feed the seagulls. One year when the track had been washed away just south of Inverness we travelled via Boat-of-Garten and Nairn, but usually we took the more direct route. We would arrive in Inverness at 9.00am with a 2-hour wait for our train to Thurso.

The journey to Thurso was a step back in time with stops at every station and longer ones at some to allow a train to pass. At these times, after the initial bustle of passengers and parcels, the place would go quiet and we joked that the engine had gone off the boil. As the morning became afternoon we would go to the buffet-car for tea with scones & jam. Finally our train arrived at Georgemas Junction where the train split in half, and we steamed off in our half of the train to Thurso.

The return journey, two weeks later, while impressive, never seemed quite as exciting. I did the journey from Inverness to Thurso a few years ago, and boy, have things changed. Inverness station was full of waiting passengers, but the train was out of action due to a broken radio. The 3-car set which had just arrived from Aberdeen replaced what had been a 6-car one, so I had to fight for a seat which was cramped and uncomfortable. Two of the toilets were blocked and there was no refreshment trolley. Bring back the good old days! The romance of those 1950s journeys can never to be repeated. Jim Gordon's story of Inverness shed and its workings brought it all back.