As part of our campaigning for better rail provision in the Highlands we sent a printed copy of our pamphlet entitled Vote For Rail! to all the constituency and list candidates of the five main parties. We asked all 409 candidates to let us know that they understood the need to put rail at the forefront of their transport thoughts. We had 14 positive replies: LibDem, 5; Conservative, 4; SNP, 4 and Labour, 1 - surprisingly none from Green candidates - perhaps they thought it went without saying!

The Highland Council gave permission for the construction of the new station at Dalcross on 27 April.

We understand from Transport Scotland that detailed negotiations between TS and Network Rail are progressing and a decision on all the remaining work arising from the Review Team recommendations, including the Lentran Loop and token-operated points is expected in the summer.

On 10 April a five-car test Inter7City train became partially derailed near Dalwhinnie Station on the Highland Main Line, when a set of points changed while the train was passing over it. The rear bogie of the last carriage and the rear power car left the rails and caused damage to the train, the track and the signalling system. The train, which was testing platform stepping distances, was travelling at around 33 mph and had no passengers. The five crew members on board were uninjured. The line was closed for five days and travel for passengers and freight was seriously disrupted due to the alternative route via Aberdeen being largely single-track. A Rail Accident Investigation Branch (RAIB) investigation into this potentially very serious incident is now under way.

An inter-modal freight demonstration took place at Georgemas on 22 April. The purpose was to show how the nuclear waste siding could be used to transfer containers from rail to road. The siding is short and the use of slings from the fixed overhead crane is required. This means that the train needs to move in between each operation and the siding length limits trains to eight containers. 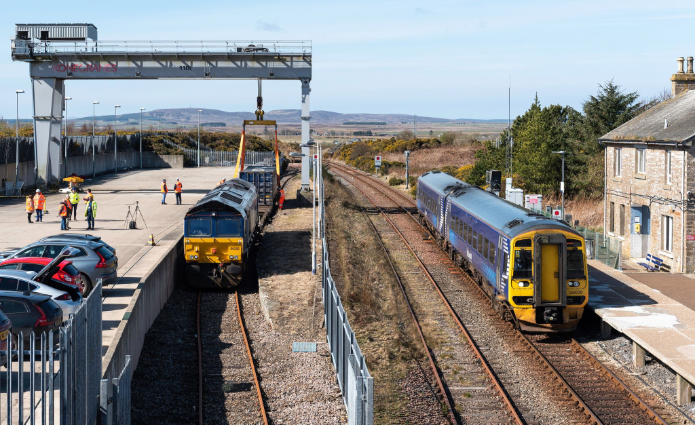 If there were to be enough traffic in the future to justify the purchase of a reach stacker, the much longer Network Rail sidings which were used for last summer's timber trial would be more suitable. 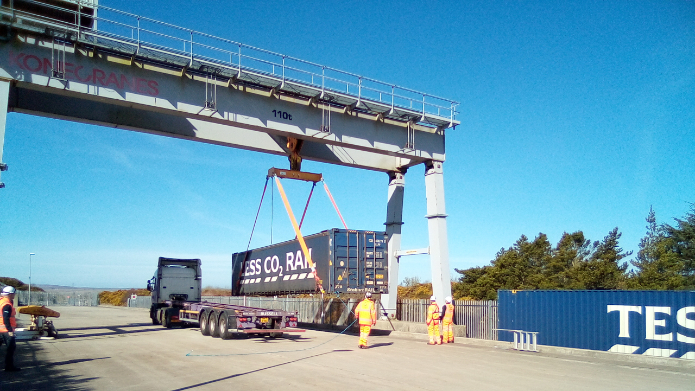 Good news is that this summer may see another timber trial, but using high-capacity bespoke timber wagons.