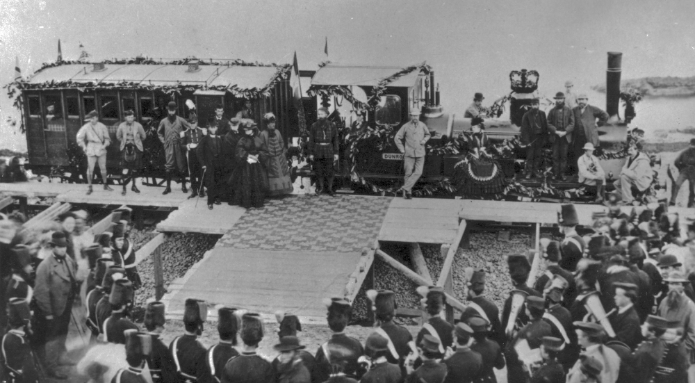 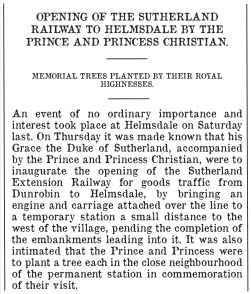 This year we celebrate the 150th anniversary of the full opening of the Duke of Sutherland's railway and its connection with the rest of the national network which took place on 16th May 1871 - a partial opening had occurred in September 1870. This section of the Far North Line ran through the Duke's estate between Golspie and Helmsdale. The Line is unique in being the only one of such a length financed by a single individual.

The 3rd Duke (1828 - 1892) was passionate about the latest technologies, especially railways. In his younger days he elected to work for a season in the railway works at Wolverton1 where he gained a good grounding in practical engineering.

So it was, when the inaugural train ran between Dunrobin and West Helmsdale on 17th September 1870, the Duke was the engine driver. The Glasgow Daily Herald of 21st September describes the arrival at West Helmsdale shown in the photo: The Duke's new engine was a sight in itself, being most artistically and beautifully decorated with flowers and evergreens besides being itself a masterpiece of engineering skill. His Grace, who is a first rate engineer, was at his post on the engine and seated beside him was the Princess2 and the Duchess. 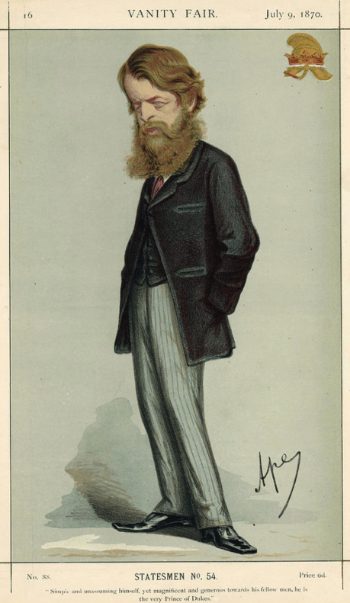 In the September 2020 edition of FNE Daniel Brittain-Catlin wrote a short piece to mark the 150th anniversary of this event.

In recognition of the 3rd Duke's contribution to the railway network, he and his descendants enjoyed the right to attach their private saloon to London-bound trains up to railway nationalisation in 1948 and the privilege of a private platform at Dunrobin until 1965.

A task which was not completed in time for this partial opening was the connection to the existing Sutherlandshire railway at Golspie. The local press gives a glimpse of the difficulties of transporting the Duke's locomotive by road over the two miles between Golspie and Dunrobin in the week before. The task took 12 hours and was achieved only by the good fortune of a Thomson road steamer traction engine, travelling up to 'pavement quarries' at Spittal in Caithness. The Duke persuaded the quarry owner, to 'lend' it to pull the wagon carrying the engine up the incline towards Dunrobin. Even so, the manoeuvre also required well over 50 men with ropes including the shirt-sleeved Duke, his son, and Prince Arthur who was staying at Dunrobin with his older sister Princess Christian.

What had been achieved to allow this opening ceremony? The Sutherland line from Bonar Bridge to Golspie had opened in April 1868. The first sod of the Duke's line had been cut on 16th February 1869 at Clynemilton, near Brora. It was a considerable feat to complete the whole 17 mile line including four stations, 19 bridges, fences and stone walls in just over two years. So confident was the Duke of the railway's progress over his estate that construction work progressed for more than a year before the Duke of Sutherland's Railway Act, legalising the works, was passed on 20th June 1870.

What follows is a flavour of the specification in the Act referencing local properties: the construction will terminate at or near Helmsdale in the parish of Kildonan and county of Sutherland at or near a point fifty yards or thereabouts southeast of Bual Cottage, occupied by Alexander Bannerman, and in a field or allotment of land at West Helmsdale, occupied by Robert Mackay, situated between the Helmsdale river and the public road leading from Helmsdale to Marril. What is less clear is how well local crofters were compensated for loss of land and amenities.

The isolated line opened for regular traffic, both passenger and freight on 1st November 1870. Ten days after this start of regular services, The Inverness Courier reports that an application was being made to lay a bill before parliament for the final push to Wick and Thurso and . . . to incorporate a company - the Sutherland & Caithness Railway Company. Relevant to this account is the add-on to the Duke's Railway that this Bill included: A Branch Railway commencing by a junction with the railway first above mentioned at or near Helmsdale station . . . and terminating at or near the seaward extremity of the harbour of Helmsdale . . .

There were similarly phrased applications for branch railways from the Wick terminus to the new harbour3 of Pultneytown now in the course of construction . . . ; and from the Thurso terminus to Scrabster harbour.

Of course none of these harbour branches were constructed but it is interesting to reflect, if they had been, how they might have affected the fortunes of these ports.

On Tuesday 16th May 1871 the full opening of the Duke's line, with its connection to the railway network at Golspie and the completion of the last cutting though a hard granite ridge just south of the present Helmsdale station, was marked with a grand banquet - or three to be exact! 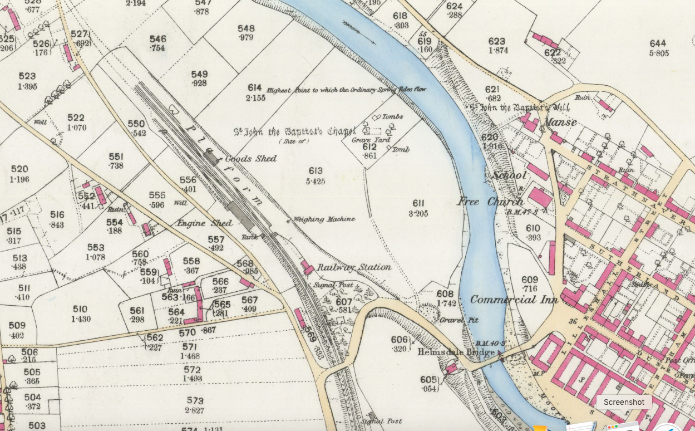 The Ordnance Survey mapped helmsdale in 1871 just capturing the arrival of the Duke's railway 'in a field'.

The scene on the day is described in The Inverness Courier 19th May 1871:

Tuesday last was a gala day at Golspie and Helmsdale in honour of the final completion and opening for through traffic of the Duke of Sutherland's Railway. The chief event of the proceedings was the luncheon to the Duke of Sutherland at Helmsdale . . . Early in the day crowds of people were conveyed to the point of attraction by train by coach and all manner of wheeled conveyances. The morning broke inauspiciously. A keen north east wind brought occasional sharp showers of hail, but now and again there were bright glimpses of sunshine.

From the John O'Groat Journal of 18th May:

The major event of the opening ceremony was a banquet, starting at 1.30 pm, in the new engine shed at Helmsdale. The decorations were made under the superintendence of Mr Mitchell, head gardener at Dunrobin . . . from rafters and pillars numerous flags were hung bearing either the Duke's arms or inscriptions suitable to the proceedings of the day such as 'Long Live the Duke', 'Success to the Railway' . . . Covers were laid for 200 but scarcely as many as that number were present.'

A speaker at the banquet after the Duke was Captain Tyler4 the railway inspector for the line. As reported he started his speech by saying: that in attending to his official duties he always liked to combine business with pleasure and when he came north he always experienced greater pleasure than in any other part of the country first and not least there was the noble Duke's hospitality so noted south as well as north . . . Today such hospitality might be considered inappropriate for an impartial inspector; it may have influenced the praiseworthy report he produced for the Duke's line.

The second banquet was for those who had worked on the construction of the line: The workmen employed online were in the afternoon entertained to dinner at Golspie at the Duke's expense. On his return from Helmsdale his Grace visited the dining Hall and made a short speech to the men. His reception was of the most enthusiastic description . . . There were about 400 present who appeared to enjoy themselves exceedingly.

Sadly no photos have emerged of this band of 'mainly Sutherlandshire men'. At the banquet there was regret expressed that the workforce was being disbanded. The work on the Sutherland & Caithness railway did not start immediately; the photo below believed to be of those navvies - possibly some of the same men who work on the Duke's line - is thought to have been taken around 1874 at Helmsdale when the line north was opened.

The third 'banquet' was for Helmsdale children, but this was not paid for by the Duke:

The children attending the two schools in the village [Helmsdale] to the number of about 3205 were in the evening entertained to a sumptuous repast in the engine room. The expense was born by the number of gentlemen in the village. The proceedings appeared to be vastly enjoyed by the young folks.

And to end this article, an excerpt from the account of the Duke's speech at the first banquet recalling how the railways had changed forever the expectations of the long distance traveller: a journey overland from the South was a serious undertaking and it may be remembered that the late Duke of Sutherland [formal reference to the 3rd Duke's father] was wont to refer to the times when he started on his northward route from Trentham [Stoke-on-Trent] with his four black horses and a coachman with a wig and used to be a fortnight or three weeks in performing the journey to Dunrobin, a distance which can now be comfortably traversed in less than 24 hours6.

Dating evidence from the locomotive: Identified as No 40 (Keith), a Medium Goods locomotive built in 1864 and here in its original form. Rebuilt in 1885. The number of men standing on the wagons suggests these were construction navvies and not just a maintenance gang

1 Wolverton Works run by the London and Birmingham Railway Company, at the midpoint of their 112-mile route.

2 Princess Helena: Helena Augusta Victoria was the third daughter and fifth child of Queen Victoria. Victoria's choice of husband for Helena was Prince Christian of Schleswig-Holstein.

3 The harbour and Pultneytown development (like Helmsdale constructed as a settlement for displaced crofters following the Clearances) was built to Thomas Telford's design in the early years of the nineteenth century. By 1862 over 1100 boats were fishing out of Wick and in the following year the foundation stone of a much larger harbour. 'the new harbour' was laid. The harbour was half built when, in 1873, a storm caused so much damage that the project was then abandoned.

4 Sir Henry Whatley Tyler (1827 - 1908) was a pioneering British engineer and politician, who contributed to the Great Exhibition of 1851 and whose collections helped found the South Kensington Science Museum. His interests were mainly in railways, where he served as Inspector of Railways and a railway company director but also in water and iron working. He served as a Conservative MP between 1880 and 1892.

5 The current population of Helmsdale is 850 of whom around 100 are children under 16.