A 1500 mile round trip from Exeter to Culrain Village Hall with my 4mm scale model railway Kyle of Sutherland filling the car, and no room for passengers. That was back in September last year, and I'm still recovering.

The model shows Culrain station as it was in 1960, complete with a dozen or so scale buildings, the road bridge from the south, platforms, loading bank and around 50 model trees.

I'd been researching Culrain since 1980, when I first surveyed the site of the station, and started the model in 2001 after retirement. Local people were extremely helpful, especially Alison Young of Station Cottage. Through Alison I met many other Culrain people and even some of the former railway employees. Over a period of time I photographed and measured everything that remained at the station. Unfortunately, the station building and most of the other structures were long gone, and only one platform remained. However, with the information I had and with the help of a few published photographs I drew up 4mm scale plans of everything as it was in 1960.

All set for visitors

The size of the scenic part of the model, shown above, is 10 feet by 3 feet. That's the same size as a 00 gauge Hornby model would be: after all they are built to the same scale of 4mm to the foot. The track and rolling stock on Kyle of Sutherland are, however, made to P4 standards. This means the rails are a scale 4'8½" apart (18.83mm), just like the real thing, compared to only 4'1½" in 00 gauge. This becomes more obvious when looking along the line.

Working to P4 standards does require extra work. The track is usually handmade: lengths of some types of track can now be bought off the shelf, but not points. The big difference comes with the modelling of locomotives and rolling stock. The clearances between the working parts of a steam locomotive, for example, can be very, very small. Sometimes as small as a few thousandths of an inch. Along with other P4 modellers, I find that a set of digital Vernier callipers is essential.

In 00 gauge, just place the train on the track and off it goes. By contrast, any imperfection, bump or wiggle in P4 track can cause a train to derail. The reason is that the scale flanges on the rolling stock are very, very small. The solution is to compensate the chassis, particularly of steam locomotives, which means allowing the wheels to move up and down independently. This is achieved by either springing, a system of beams bearing on the axles, or a combination of both. Never a fast worker, the chassis of a P4 steam locomotive might take me a month to make. 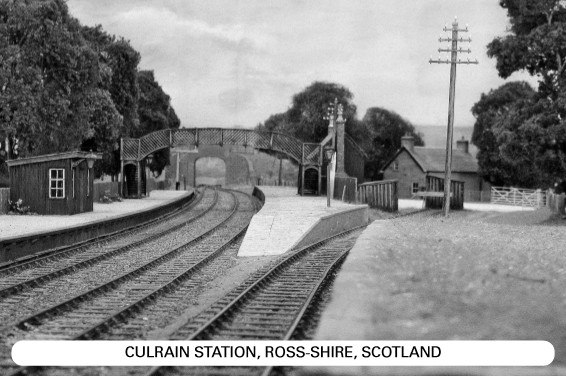 Looking south from the signal cabin steps.
Right, is this the real thing or is it the model? If you're not sure, hover over the picture...

But it's all worth it: over 150 people came along to Culrain Village Hall to see the model and to share their memories. Old friends met and reminisced about the station and the railway over coffee and cake. And some brought old photographs adding to my knowledge of what it was like in the 1950s and 1960s. Here's thanks to them all. And especially to the man who told me that as a little boy he used to climb up into the metal frame of a station lamp (presumably the lamp itself was being repaired) and sit there to the amusement of passengers. I wish I had a picture of that.