The Urgent Need for the Lentran Long Loop

"Good to see you this afternoon. We had arrived a few minutes late but when we got to the station for the homeward journey the 17:12 to Ardgay was cancelled. As you know this is a very busy commuter train so we had to all pile on to the 17:54 train to Kyle of Lochalsh. I have had problems before with trains at this time. All I can say is that this doesn't encourage people to travel on the train when they should be leaving their cars at home or in a station car park."

This email came from a regular traveller between Beauly and Inverness on the Far North Line on Thursday 24 September 2015. The regrettable cancellation was to the commuter train which serves Beauly, Muir of Ord, Conon Bridge, Dingwall, Alness, Invergordon, Fearn, Tain and Ardgay in Easter Ross.

The cause was the late running of two inbound trains from Kyle of Lochalsh and from Wick which were both projecting arrivals soon after 17:30. Because of the 1960s singling of the track for the entire 20 minute journey between Muir of Ord and Inverness, when these two trains were coming in, nothing could go out in the opposite direction.

This single line section is a real impediment. The delays and cancellation on 24 September provide just one instance of the frustration felt by passengers at the continued lack of progress to update the inadequate infrastructure on the Far North Line. FoFNL tries to impress on ScotRail that the commuter trains are vital to the line and should not be cancelled. Network Rail needs to provide more line capacity and politicians are asked to ensure that they are funded to do this.

Please read on for the detail. 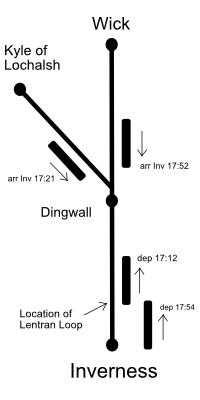 The Kyle train had left Kyle 64 minutes late at 14:50. By Dingwall it was 67 minutes late leaving at 16:58. It would have reached Muir of Ord at about 17:10 wishing to occupy the single track on to Inverness. The signaller had a choice either to let it through and delay the 17:12 Ardgay commuter or to hold the incoming Kyle at Muir of Ord for 20 minutes and make it nearly 90 minutes late. There was just a chance that passengers from the north might catch the 17:30 connection to Glasgow at Inverness. In fact, the train was let through but the 17:30 seems to have left on time so any passengers for the south missed it by just three minutes and would have had to wait until the next service at 18:46. The reason for the delay to departure from Kyle was a lineside fire at Muir of Ord which had delayed the outbound working at Muir of Ord between 11:20 and 12:27.

The 17:12 commuter could have been allowed to leave and occupy the single line from 17:31 but there was still the 12:34 train from Wick to come in. This had been delayed by 21 minutes very early in its journey at Georgemas Junction because a passenger had been taken ill. It was 35 minutes late from Lairg because it had had to wait there to pass the 14:00 northbound service which it should have crossed at the next passing loop further south at Ardgay. It then lost another 13 minutes between Alness and Dingwall because the late running train from Kyle (above) was to be first through the junction at Dingwall where the two lines merge. Thus it was 48 minutes late from Dingwall and would have reached Muir of Ord at around 17:25. This was before the 17:12 Ardgay commuter could have left Inverness that night and so the Wick train was allowed to use the single track and arrived in Inverness 50 minutes late at 17:51.

You will note that this is just before the departure time for the next scheduled train north, the 17:54 to Kyle of Lochalsh. There was no track space to run the 17:12 commuter unless it had been attached to the 17:54 at Inverness and detached at Dingwall to go north. Such is the challenging intricacy of making the Far North Line timetable work due to the paucity and wide spacing of passing loops that this would have been tricky to achieve.

Merging the rolling stock of the 17:12 and the 17:54 into one train at 17:54 would have made the journey much more comfortable for the passengers who were crammed in to one set. Once detached the 17:12 could also have found a path north to Tain arriving there at 19:07 at the right time to avoid any delay to the 16:00 from Wick due to leave Tain at 19:08. If it had been terminated there and taxis found for the remaining Ardgay passengers, the 17:12 could have picked up its return schedule and saved that train being cancelled anyway.

What ScotRail chose to do was to bus those passengers on the 17:12 who were going north of Dingwall and cram the 17:12 passengers for Beauly, Muir, Conon and Dingwall on to the 17:54. The passengers for north of Dingwall might well have got home at roughly normal time due to the A9 road to Alness being more direct than the route of the railway since the Kessock Bridge was built. If there was road congestion getting out of Inverness or on the bridge this might not have been the case. Road congestion is one reason why the rail service is so valuable and needs to be nurtured and improved.

These sorts of delays have been happening frequently for many years and, as traffic increases have become more acute, are leading to a decline in passenger confidence and satisfaction. Passenger usage which has been regularly showing substantial increases each year has now seen a (hopefully temporary) fall over the last 18 months largely due to the recent unreliability of the services.

The success of the line has meant that passenger services have been expanded and it is now difficult to provide paths for extra freight, or for lucrative charter trains attracted by the stunning scenery of the lines to Wick and Kyle. Both lines share the same tracks as far as Dingwall and the long single track section from Inverness to Muir of Ord is right at the start of both journeys. Six miles from Clachnaharry through Lentran to Clunes (Kirkhill) used to be double track and its reinstatement would make a huge improvement to capacity and punctuality. Altering the timetable is not an effective option because trains from both lines have to be flighted together in both directions to achieve connections at Inverness.

Please may we see plans drawn up for the Lentran Long Loop without further delay?

David Stewart (Highlands and Islands) (Lab):
When the minister next meets Network Rail, will he raise the problem of the congested 20-minute long single-track section of rail between Inverness and Muir of Ord, which has led to cancellations and severe delays in services? It frustrates the further expansion of passenger, freight and charter train traffic on the Kyle and far north lines. Will the minister support the reinstatement of the six-mile section through Lentran to double track, which would solve the problem?

Derek Mackay:
I fear that the member might have pre-empted the next question, but I will answer anyway.

In the current control period, we are trying to maximise what we can do through timetabling and the deployment of resources. There have been issues around staff deployment, but I believe that they have been resolved.

For longer-term investment, we will look at the next control period, but there are two major issues to consider: the availability of resources and the potential restructuring of Network Rail. That is why I will participate in any review that is undertaken of United Kingdom-wide Network Rail issues. While considering resources and potential restructuring, I will bear the member's suggestions in mind.

Liam McArthur (Orkney Islands) (LD):
The minister will be aware that the issue is of concern not just to those in the inner Moray Firth area but to my constituents, who rely on the line north of Inverness. I encourage him to look seriously at the option of twin tracking, not just because it would benefit the passenger service but because it would encourage the movement of freight off roads and on to rail. Will the minister give that serious consideration?

Derek Mackay:
Of course we will give the option serious consideration, but we are constrained by the available resources in the current control period. We will be as creative as we can be to maximise our railways' potential.

John Finnie (Highlands and Islands) (Ind):
I am similarly interested in the Far North Line and in the representations that have been made to the minister. Will he look at how the city deal could be involved in funding the Lentran loop and addressing the signalling challenges to movement on the Far North Line?

Derek Mackay:
It is open to local authorities that are in collaborations such as a city deal to come up with transport projects, and it is for them to decide on their local priorities. I would welcome any bid from city deal alliances, from wherever they come, to support transport infrastructure investment.