This is an article that first appeared in North 7, issue no 45 May/June 1981. North 7 was the bi-monthly magazine of the Highlands & Islands Development Board. The 7 refers to the seven crofting counties.

The trackwalker - neglected figure in an age of high speed travel

Rob MacLachlan talks to a man with a vital, if sometimes forgotten, job.

"This Is the Age of the Train" proclaim British Rail's speed-blurred adverts to branch line commuters and intercontinental explorers alike.

Alas, it is also the Age of Taking Things for Granted. How many people, winding their familiar way home at night or hurtling through the time barrier on an lnter-city 125, know that for every 10 miles of track designed to carry them on carefree comfort there is a man who earns his living primarily BY WALKING. Men like James Sutherland, who bears the same name as the county - second most northerly on the British mainland - where he works in one of the 'permanent way' or 'P-way' gangs on British Rail's North Highland Line (Far North Line). 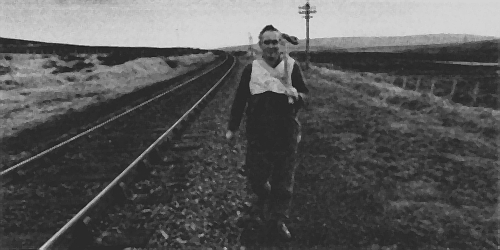 The 161 mile single track railway hugs the indented eastern coast of Ross-shire and Sutherland for most of its journey from lnverness to Helmsdale. Then it veers suddenly inland across the Sutherland bogs to avoid the steeply looming Ord of Caithness. Mr Sutherland is one of three trackwalkers who keep a time-sharpened eye on the desolate 23 mile section between Helmsdale and Forsinard, split into three more or less equal stretches by the lonely moorland villages of Kildonan and Kinbrace. Twice a week, whatever the season, walking one side of the line on Mondays and the other on Fridays, they make sure that the rails, sleepers and fastenings are in sound condition to carry the three passenger trains and one goods train in both directions each day.

In theory at least, the trackman's task is simple enough - though, as in other jobs, you have to learn the language first. Each rail is made up of 60 foot lengths aligned by fishplates bolted on either side of every join. The rails sit in U-shaped chairs and are made fast by wedges - called keys - hammered tight between rail and chair. The chairs are bolted onto wooden or concrete sleepers bedded in stone ballast. At one time, each section of the line was walked every day. But gradual improvements - for example replacing wooden keys with metal keys, wooden sleepers with concrete sleepers, and ash ballast with stone ballast - allowed BR finally to reduce their inspection rate about 10 years ago.

Most maintenance jobs, like replacing rotted sleepers or cracked fishplates, and redistributing ballast require more than one man, so the trackwalker makes a note to return with help another day. Minor defects can be put to rights immediately. Walking the mid section of the Helmsdale to Forsinard line, from Kildonan to Kinbrace, James Sutherland carries the standard trackman's kit: a hammer to strike wayward keys into place, a spanner to tighten loose fishplate bolts, and warning flags and detonators to stop trains in an emergency. 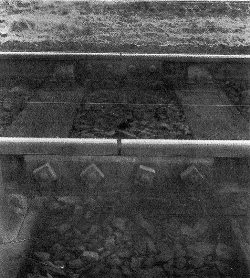 Intending passengers need not panic - the 'detonators' are merely percussion caps which, placed on the rail and set off by a passing train, make a loud enough bang to warn the driver that something's amiss.

Mr Sutherland joined BR as a fireman in Glasgow 35 years ago, and lived a while in Inverness before moving back to his native Helmsdale to tend the family croft - like many thousand other Highlanders - on a part-time basis. In 1962, when diesel took over from steam on the North Highland Line and the old engine shed at Helmsdale was closed, he was faced with the choice of leaving Sutherland to continue working as a footplateman somewhere else, or staying on his croft and joining the P-way gang. He stayed: but in 19 years as a trackman he has never had to bring a train to an emergency halt! Which is not to say that there have been no emergencies. Occasionally, he has been called out in the night to check flood damage to the track. But his most worrying moment came just three years ago, in the early stages of the ferocious blizzards which blocked the North Highland Line for a full week in January 1978.

One of the wintertime dangers is that snow on the inside of the rails will be compacted into ice by the wheels of successive trains until it reaches the same height as the rails. Now and again, freak weather conditions arrive faster than the track patrols.

The Saturday night train to Wick had been derailed by compacted snow just north of Forsinard. The passengers were rescued in spectacular style by a military helicopter on Sunday, but the hard work of re-opening the line - made top priority because the roads had been hopelessly blocked - could not begin until a relief train from Inverness reached Helmsdale on Monday morning.

"We made it about halfway to the stranded train", recalls Mr Sutherland, "when we ourselves were derailed just south of Kinbrace. "Fortunately we were spotted by a rescue helicopter, which alerted lnverness to send up another train. But we were stuck for all of five hours, and the track was badly damaged."

"Where the engine had come off the rails, it sheared across the chairs. I cleared away the packed snow to find that it was only the snow that was still holding the rails in place". Ever since that fierce winter week, railway wits have renamed Forsinard as 'Freezing Hard'. Fortunately, even in the wild north, familiar as it is with the terrible temper of the elements, such dramas are rare.

A track walker, who must recognise all the early warning signs of danger, goes first through an apprenticeship and then a training course. But winter requires an extra qualification - toughness. He cannot turn back just because the cess - his lowered path between the track ballast and embankment - happens to be filled with snow. Up ahead, fishplates may have been cracked by severe overnight frost, and the rails may be heaving.

During the harshest months, James Sutherland must carefully weigh the advantage of more warmth from extra clothing against the disadvantages of increased weight and restriction of movement. The Highland summer is more benign, but it too can cause concern. The danger of rails contracting and heaving in extreme cold is replaced by the possibility of them expanding and buckling in high temperatures. A maximum gap of three eighths of an inch between 60 foot lengths of rail doesn't give much of a margin to play with, so patrols are stepped up during a heatwave. That's when the trackman - wearing his compulsory bright orange safety vest - can sweat like a walking sauna.

Despite his concentration on the rails, and the distractions of the shimmering, summertime moorland world, he must keep his wits sharp lest a train takes him unawares - a particular danger on a single track line, especially at bends and cuttings. Somehow that is a harder discipline when the trains are an hour or more apart than it is on the busy inter-city lines of urban Britain where they flash past every five minutes, and the trackmen still have to walk their beat daily because of the faster wear and tear.

But compared with men, who understand the railways, animals who wander onto the line can find it a lethal and bewildering trap. Inevitably, over the years, the North Highland Line has taken a fair number of the sheep that provide the backbone of the crofting economy. The trackmen do their best to shore up the boundary fences, but it would take very costly high fences to stop the wild deer - who come down to graze on the low ground in winter - from leaping onto the track. Too often they meet a distressing fate. "If a deer crosses the line to graze on the other side", explains Mr Sutherland, "and is then startled by a train, its natural instinct tells it that the safest course is to go back the way it came." "Unfortunately, that means trying to cross the line in front of the oncoming train, and many of them don't make it". He has also seen the occasional fox or badger come to grief, paralysed in the dark by the noise or lights of a fast-approaching engine.

There is one creature, however, which the trains rarely injure, but the trackmen destroy at every opportunity. Adders - known locally as 'serpents' - are fond of the peat embankments and in hot weather they coil up on the warm, exposed sleeper ends to bask in the sun. "We kill the serpents" says Mr Sutherland, with the countryman's unsentimental pragmatism. "If we don't, there's always the risk that next time they meet a human, it's they who'll be on the winning side".