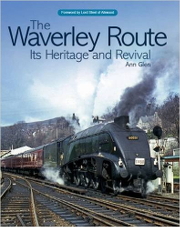 If you are looking for a book packed with information and photographs about the history of the Waverley Route and associated railway projects in the Borders, up to the reopening of part of the route in 2015, this is well worth considering.

The narrative is very matter-of-fact, making it quite a concentrated read from cover to cover but it is an excellent reference book. I particularly enjoyed seeing photos of the lifting of the track in 1971, and the relaying in 2015, both showing the Ladhope retaining wall, part of which had dramatically collapsed in 1916 and which had remained a tantalising reminder of the railway during its absence.

Those with a knowledge of the Far North Line will enjoy the reference to the Euston-Thurso through trains that ran via the Waverley Route from 1917-19 for the movement of Navy personnel. These were colloquially known as the "Jellicoe Express", although that title does not appear in the book.

Ann Glen does not emphasise the consequences of the scaling down of the project in terms of double-tracking, or the shortsighted decision to build some overbridges as single-track when it is hard to believe that the cost of making them wide enough for double would have been very significant. 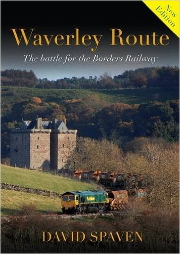 David Spaven has grown up, man and boy, with the Waverley route from Edinburgh to Carlisle via Galashiels, Hawick and Riccarton Junction. A key member of the Campaign for Borders Rail he is well qualified to take us through the long and convoluted struggle to get the northern part of the line reinstated.

The closure years from Dr Beeching's report in March 1963 until final closure in January 1969 are covered in detail. No other closure in Britain left so large a population so far from the rail network. The political manoeuvring which went on is absolutely fascinating to read today and it is difficult to escape the view that the route (at least as far south as Hawick) was unlucky to be closed. The North Berwick line was in a similar situation but escaped the axe and has gone on to be extremely successful.

There followed the three years of "lingering death" before the lines were torn up and another twenty years before a group came together to pursue reopening. In 1998 the Campaign for Borders Rail was being founded and economic development necessities and support from the Scottish Office led to consultancies reappraising 28 reports on the line dating back to 1966. The Scott Wilson report in 2000 suggested reopening as far as Tweedbank and a new Scottish Parliament was able to take things forward - eventually, with many turns and twists in the story, all equally fascinating.

The opening of the railway has been a triumph for persistence, but there are disappointments too. The railway project has had to pay for 10 km of new road as well as 49 km of railway. Maybe it was this that led to the cutback of some proposed lengths of double track (including at Portobello Junction) thus failing to learn the lessons elsewhere in Scotland (such as on the FNL) of how crippling this can be to operating efficiency. A faster service could have been achieved, but passengers have enthusiastically supported the line and the Borders have received a huge economic boost and a fine transport interchange at Galashiels. Everyone interested in railways should read this book.