When the UK2070 Commission Final Report came out on 27 February the urgent message to government it delivered gave us the opportunity to highlight its relevance to the Scottish Government, especially in terms of transport policy. All governments enjoy being the instigators of prestigious projects so we wanted to point out that, in the era of extreme concern about the effect of burning fossil fuels, the Scottish Government should be looking to achieve some flagship rail projects in the very near future.

FoFNL therefore sent a letter to every MSP suggesting that now is the time for rail to be at the forefront of their transport thinking. We attached the UK2070 Commission press release to the letter we sent.

MediaCityUK, Salford, 27 February 2020 - The UK2070 Commission issued both its Final Report Make No Little Plans - Acting At Scale For A Fairer And Stronger Future1 and an Executive Summary2 of this Report today, with chair Lord Kerslake, the former Head of the Home Civil Service, warning Government that it must "go big or go home" if it is to arrest further economic decline and social division. 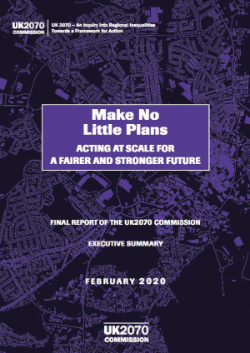 Lord Kerslake said: "The Government's desire to level up the UK economy is welcome. However, the scale of the challenge we face is such that we need a generational shift if we are to avoid serious decline and division. Many people in Britain feel left behind by growth elsewhere and that has contributed to an acrimonious debate about Europe. We now face a decade of potential disruption - leaving the European Union, confronting the impact of climate change and adjusting to the fourth industrial revolution.

"Our research shows clearly that these inequalities did not grow up overnight. They reflect an over-centralised system that fails to comprehend the reality of regional need and consistently comes up with policies that are either under-resourced, too fragmented, or too short-lived to make a difference. Some policy guidelines have actively stacked the odds against the regions. Time is not on our side and we cannot afford to keep on repeating those mistakes. Government must therefore think big, plan big and act at scale. Bluntly, if it can't go big, it should go home."

The Friends of the Far North Line

We at the Friends of the Far North Line read the summary of the UK2070 Commission report Make No Little Plans - Acting At Scale For A Fairer And Stronger Future with a feeling that it happens to encapsulate our view of the Scottish situation, especially with regard to rail infrastructure.

As you will be aware, Transport Scotland is currently compiling the Scottish Government's Strategic Transport Projects Review (SPTR2) update and has just released preliminary documents summarising the current position and listing challenges which have been described by stakeholders across the country.

Stepping back from the minutiae it is our belief that some very large rail projects are urgently needed. Naturally our first thoughts have to be about the requirements of the Far North Line itself and much work is already in progress to tackle some of its shortcomings, as agreed by the Far North Line Review Team. However, our passengers very often travel far beyond the FNL and this is when the need for major investment becomes very apparent.

Of the two routes onwards from our southern terminus at Inverness, the line to Aberdeen recently received some of the transformational funding it desperately needed, and more is required for it to become a true inter-city passenger and freight route. However, it is the Highland Main Line which needs major investment. It directly links the Far North and the Highlands to the Central Belt conurbations, the English network and the rest of Europe.

First, the line is currently not electrified. This means that the new LNER Azuma trains have to use their diesel engines and can't operate their service as fast as the ScotRail HSTs. It will have to be electrified soon anyway to meet the 2035 rail decarbonisation deadline, so that is an urgent priority. Extending electrification northwards from Dunblane to Perth is already in the pipeline.

At least as important as that is the need to double-track most, if not all, of the route from Inverness to Perth. Currently, capacity for both passengers and freight is strangled by the fact that 81 miles of the 118 mile route are only single-track*. The recent work on the line made only small improvements.

This leads to the next main requirement for the Scottish inter-city network which is to reverse the closure in 1970 of the direct route from Perth to Edinburgh, which was done partly to make space for the M90. Restoration of the fast link between the cities would reduce journey times from above 80 mins to around 45 mins and would be likely to cost less than half what is currently being spent on dualling the A9. Currently, the journey from Perth to Edinburgh by rail is slower than it was in 1895. Surely Scotland cannot tolerate this any longer.

The re-opening of the direct route from Perth to Edinburgh will tie in very effectively with the HS2 project which will bring enormous benefit to Scotland through faster and better connectivity with England and Europe.

Scotland has the opportunity to embrace the Scottish Government's policy to achieve modal shift from road to rail and make really big improvements. What is needed is for MSPs from all parties to see what needs to be done and sign up to these flagship projects.

* The rail equivalent of a 'single-track road with passing places'.

FoFNL is delighted to have support for this statement from these organisations: Inverness Chamber of Commerce, Rail Freight Group and Transform Scotland.