A New Branch Line on the FNL during the First World War - for a special, strategic project on the shores of the Cromarty Firth.

This note was produced following a community history project in Alness & Invergordon carried out under the auspices of ARCH (Archaeology for Communities in the Highlands) in 2019. More images are available at www.fofnl.org.uk/fne80.php. Photos: The Wayne O. Abbott Collection, courtesy of Invergordon Museum, www.invergordonmuseum.co.uk

At the start of World War One the Royal Navy decided to develop a northern fleet anchorage at Scapa Flow and to make provision for dockyard facilities at Invergordon. The main route for supply of provisions for those facilities was to be along the Highland Railway's mountainous single-line routes from Perth to Inverness and from Inverness to Thurso, and the Admiralty's decision greatly increased the strain on the logistics of the railway.

With manpower and resources conscripted elsewhere for the war effort the resources of the Highland Railway became extremely stretched. It is suggested that almost 50% of the locomotives were out of service, and many of the mechanics and fitters had been conscripted. For transport to and from Scapa Flow a major flow of personnel and freight north and south, including timber and construction materials for the numerous facilities, brought over 35 trains passing through Alness each day by May 1916. Including the Naval Special trains, the 'Jellicoe Expresses' each usually carrying over 400 persons, over 1000 troop trains passed over the period of the war, with ambulance trains in addition.

Construction of a major naval shipyard from scratch at Invergordon (previously just a small town), with housing and infrastructure for 4000 personnel, brought a total of almost 20,000 wagons during the first 3 years of the war. It is reported that at times almost every siding north of Perth was full of wagons. In the 8 months from February to September 1918 the sidings at Alness alone handled nearly 5000 wagons.

From 1915 huge tonnages of supplies to support the war effort came across the Atlantic from the United States of America, but the increasing losses caused by German U-boats and other naval encounters were causing major anxiety in Whitehall and in Washington; 2.3 million tons was lost in 1916, but 6.2 million tons in 1917. In the one month of April 1918 it was 881,000 tons! When the USA decided in 1917 to join the Allies in direct action in Europe against Germany such losses could not be sustained. The US Navy developed the concept of a Northern Barrage to contain the German Navy; it would stretch between Orkney and Norway, a 'net' of naval mines some 250 miles (400 km) long, 25 miles (40 km) wide, set at depths of 25 to 240 ft (7-73 m). It would involve the placing of some 100,000 mines and it has been suggested that the budget in 1917 was $200 million, or above!

Components of US Type V1 mines would be delivered to Scottish west coast ports, and the mines assembled at two locations on Scotland's east coast, - at Muirtown, Inverness on the site of Glen Albyn Distillery (US Navy Base 18), and at Dalmore (US Navy Base 17) on the Cromarty Firth. Provision was made for assembly of 1500 mines per week at Muirtown and for 2000 per week at Dalmore. For Muirtown the components were delivered from the USA to Corpach, on Loch Linnhe and transported through the Caledonain Canal on lighters to the Muirtown Basin. (Components of mines contributed by the UK were shipped to the Clyde and on to Grangemouth for assembly.) From each assembly place the mines would be delivered to US Navy ships for placing in the Barrage. Those from Muirtown were shipped via the Inverness Firth, and those from Dalmore via the Cromarty Firth. (From Grangemouth this was done via the Firth of Forth.)

The Admiralty had taken over the 10-acre facility at Dalmore Distillery in October 1917; firstly, some 6,500 casks of whisky had to be moved to storage elsewhere in Easter Ross. Building of workshops, sheds and assembly lines required delivery of some 7,000 tons of materials. That work was finished in May 1918 and the site then handed over for US administration.

Supplies for Dalmore were delivered to Kyle of Lochalsh and brought east via the Dingwall & Skye Railway (D&SR) to Dingwall, and then via the Highland Railway (HR) to a new spur line at Belleport about halfway between Alness and Invergordon. (This is not to be confused with the already existing private branch line running south from Alness Station to Dalmore Distillery which ended at a point above the north side of the distillery.)

The D&SR was commandeered for the war effort; the HR was not allowed to carry any freight on the line and was restricted to one passenger train per day in each direction. Additional water towers were provided along the route, with a new and longer passing loop at a point between Achnasheen and Achnashellach near Luib Summit, and new sidings were provided at Duirnish. Trains consisted of 11 wagons and it took a week for 3 or 4 trains per day to transfer a shipload to Dalmore some 73 miles (117 km) from Kyle. Problems of operation of the railway were compounded by availability of wagons and return of empties. 'Skye Bogie' 4-4-0 locomotives of the HR had been designed specially for the conditions of steep gradients and tight curves of the line, but so few were serviceable that an additional 3 'Loch Class' were built in 1917 for use on the line; Tractive Effort of HR locomotives for the Kyle Line was about 14,000 lb (62 kN). Some 150 12-ton coal wagons were loaned from the South Eastern and Chatham Railway for carrying the components. (The Railway Executive Committee allocated 4 locomotives, similar to 'Skye Bogies', for use on the HR from the London, Brighton and South Coast Railway.) 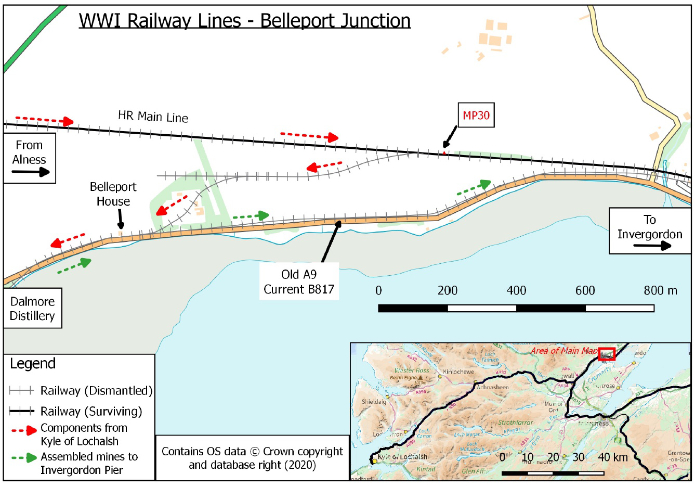 A new branch line from the HR main line between Alness and Invergordon was required to connect to Dalmore. The new 'Belleport Junction' was created close to milepost 30 (MP30), just west of the stone bridge over the main line, which connects the fields of Rosskeen Farm, above the present-day Invergordon Boating Club on the present B817 road [grid reference NH 681692]. Land survey and crop markings on aerial photographs of the 1950s of the Rosskeen Farm fields give a guide to the actual position of this branch. There was a spur on this new branch, which may have served for marshalling or as an 'escape' to protect the Dalmore site in case of a runaway. The route of the branch passed through the present-day copse, east of the water treatment plant, then very close to Belleport House, crossed the former A9, now the B817, and entered the Dalmore Distillery site at the east gate. The average gradient on the line from the junction to shore level was approximately 1 in 80 (1.25%). During fieldwork for the ARCH project a 7-metre length of railway track was discovered in the copse, near part of the 'projected route' of this branch line.

The first load of components for mines to be assembled at Dalmore, along with associated engineering provisions such as mobile cranes etc, arrived at the railhead at Kyle of Lochalsh on 29 May 1918 on the converted mine carrier Lake Superior; thereafter loads arrived at about 2 weeks intervals. Supplies included equipment for the bases, supplies for the mine-laying ships, hospital equipment, and food as well as components for the mines. Pratt records that of the total tonnage arriving at Kyle, (32,800 tons between May 1918 and November 1918), 24,000 tons were conveyed to Dalmore in some 400 special trains. 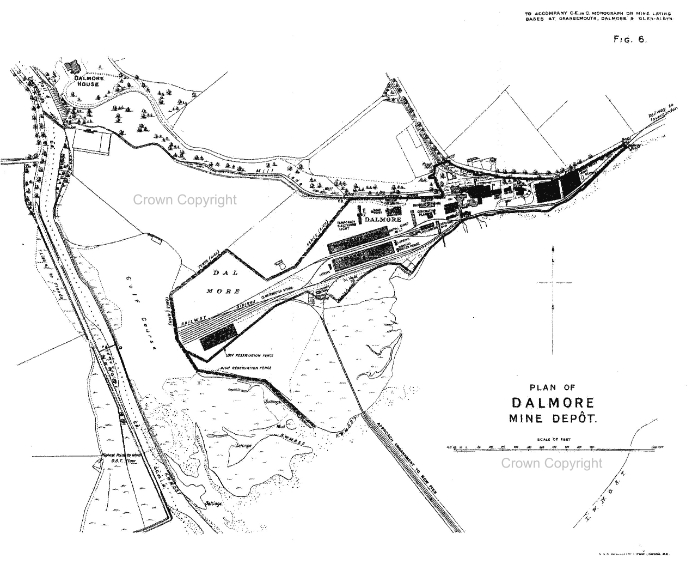 The assembly sheds at Dalmore were accommodated at the western end of the site, which comprised of over 26 acres (10.5 ha), with almost 1 mile (1.6 km) of standard-gauge sidings. In the assembly sheds, 3¾ miles (6 km) of narrow 29 inch (0.74 m) gauge tracks were laid to accommodate the sinkers (anchor boxes) that would later also carry the mines (referred to by the US Ratings as 'eggs') on the minelayers for deployment at the barrage. A pier (locally known as The Yankee Pier) some 1850 ft long (550 m) was constructed with the intention of being able to load minelayers directly in the deep water of the Cromarty Firth. This had provision for two sets of rail tracks, and the pierhead extended some 400 ft (120 m) westward, accommodating 4 tracks. The rails for the whole project were provided by redeploying track from distillery operations between Buckie and Keith. 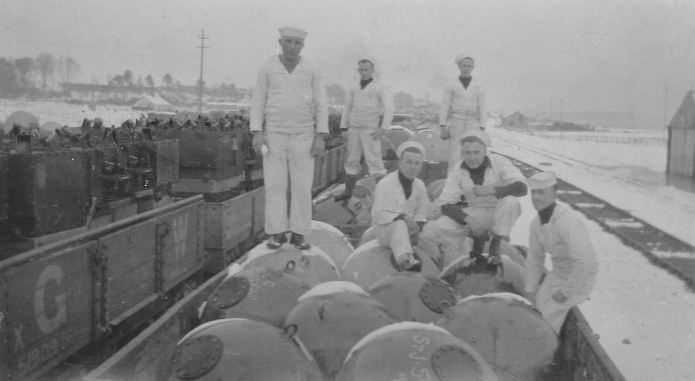 US sailors with components awaiting assembly

Upon arrival at Dalmore, the parts for assembly were unloaded from the delivery wagons by crane. Each mine had over 100 parts to be assembled from components manufactured by 140 manufacturing contractors and over 400 sub-contractors. The completed mine was connected to its sinker by a steel cable, the length of which determined the height of the mine above the sea bed after laying. The total weight of the assembly was about 1400 lb (0.6 tons / 636 kg).

Until the pier was completed the assembled mines on their sinkers were taken to Invergordon pier for loading on to the minelayers. They were not allowed to be carried on the track of the Highland Railway, so a separate standard gauge single track was constructed on a low-level route close to the shore. It ran on the north side of the former A9, now the B817, and crossed the Rosskeen Burn on a timber trestle bridge between the road bridge and the main railway embankment - at low tide the bases of 2 piers of the trestle bridge can be seen on the west side of the burn. From there, the route passed behind the present houses on the east side of the burn, crossed the main road just below Invergordon Golf Course, carried on along the shore side of the road and joined the existing harbour railway system to the pier at Invergordon. The 'relief' line carried 3 or 4 trains per day, plus return of 'empties'.

At the pier, the mines, along with their sinkers, were offloaded onto lighters, which shuttled them to the US minelaying ships moored in the Cromarty Firth.

Locomotives provided at Dalmore/Invergordon were: 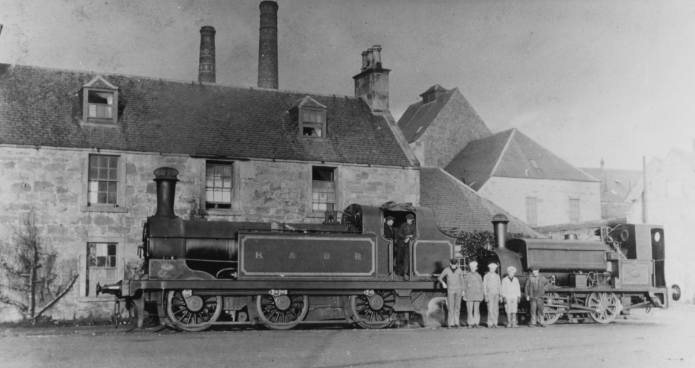 The Armistice was signed before the Barrage was completed, but when hostilities ceased Grangemouth had delivered 13,546 mines, Muirtown 27,641, and Dalmore 28,930 - a total of over 70,000 assembled, delivered and laid between May and November 1918!

Although not used during the laying of the mines, Dalmore Pier was instrumental in the decommissioning of them and the return of the materials to the United States The US Navy withdrew from the site on 1 March 1919 and the Admiralty took it over. The Dalmore branch line, the tracks at the site and the 'relief' line from the site to Invergordon were dismantled in 1921.

Construction of the pier involved conveyance of 13,000 tons of materials in approximately 2000 wagons, at total cost of £114,000. The pier and the site served the war effort again in World War 2 as an RAF Training Base for Sunderland Flying Boats and for Catalinas.

Much of the information for this note came from:

The Yankee Mining Squadron by Reginald R. Belknap of the US Naval Institute, 1920.

Minelaying Bases at Grangemouth, Dalmore and Glen-Albyn, Admiralty Pamphlet TH45, in CB1515 (45) - The Technical History and Index Vol 6 (Sept 1920) A Serial History of Problems Dealt with by Admiralty Departments.

Operational Characteristics of US Naval Mines; ORD 696(B); Department of the Navy Bureau of Ordnance, August 1959. https://archive.hnsa.org/doc/mines-usn/index.htm

British Railways in the Great War by Edwin Pratt, 1921.

In a closing summary Pratt reflects on the challenge faced by the Highland Railway in light of the extent of single-line working north of Perth and recommends that, if it were ever envisaged that similar circumstances might be faced in the future, work should be undertaken to provide dual track throughout the area!! He states that it was negligent of 'our Government' in 1914 not to make such provision and compares this dereliction of duty with the actions of pre-war Germany in assiduously constructing strategic rail infrastructure.

"We are led to the conclusion that the country should profit by the lesson...and not leave in its present state a line as important as the Highland Railway has now proved to be."

Larger versions of the photos and maps in this article are available, along with some extra views, at www.fofnl.org.uk/fne80.php