Time for Timber Trucks to Give Way to Trains

This article by FoFNL committee member, and Scottish Representative of the Rail Freight Group, David Spaven, first appeared in the Friends of The Scotsman on 10 January 2020.

Given the importance of timber to the rural Scottish economy - with 10m tonnes forecast to be harvested every year for the foreseeable future - readers will perhaps be surprised to learn that not a single wagon of timber has moved by rail in Scotland for 10 years. But there is now renewed hope that timber trains will once again operate north of the Border, helping the industry to meet the targets for rail freight growth set by the Scottish Government.

For a period of around five years in the late 1990s, underpinned by the wagonload train service network operated by the newly-privatised freight railway, a wide range of timber flows was transported by rail from Scottish forests. Trains took logs from up to 18 timber railheads spread across the country to board, paper and saw mills in Scotland, England and Wales, helping to ease the pressure from 44 tonne trucks on rural roads and rural communities.

However, shareholder pressure for commercial returns led to a rationalisation of the wagonload network in 2000, notable in Scotland for the withdrawal of services from 12 of the timber terminals. The fragmented flows of timber - particularly to those mills (the majority) which were not directly rail-connected - did not lend themselves to competitive pricing or service quality.

The final surviving timber train service - carrying a payload of over 600 tonnes - operated from a Crianlarich railhead, but was suspended in 2009, in part due to concerns about HGVs having to reverse out on to the A82 trunk road because of the entrance configuration and lack of space within the adjacent rail yard.

Ironically, Scottish timber still moves by train, but only southwards from a Carlisle railhead, with HGVs feeding in supply by road from wide tracts of forest in the Borders and Dumfries & Galloway. The continuing success of the Carlisle rail facility has been attributed to five factors:

To the above should be added the principle of partnership and good communication between all the players in the supply chain and the critical importance of the motivation, management and performance of the rail haulage company. The challenge in Scotland is to identify locations which can cost-effectively replicate such conditions - and/or to find innovative, but robust, methods of transferring logs from truck to train deep within timber harvesting areas.

In recent years the forest industry and HITRANS, the regional transport partnership for the Highlands, have been exploring the scope for revived rail timber transport on the Far North Line to Caithness, and the West Highland Line to Fort William, both of which pass directly through heavily-forested areas, in some cases getting closer to the timber than public roads do.

However, forests are owned and/or managed by a variety of private and public sector interests, and securing their co-operation to co-ordinate supply - sufficient to fill big trains - can be challenging. But awareness of the climate emergency is adding further pressure to identify rail-based solutions, which would also cut road accidents and reduce the heavy maintenance burden on rural roads. And Scottish Government grants are available to support the transfer of freight from road to rail.

Other rail routes with timber potential include Inverness to Kyle of Lochalsh and the Ayr-Stranraer line serving the extensive South Ayrshire and Galloway forests. At Crianlarich on the West Highland Line, the A82 now bypasses the village, creating the opportunity for a more accessible, fit-for-purpose railhead to take trucks off the main road south by Loch Lomond.

Direct rail connection at one end of the transit at least - saving the cost of rail to road transfer and local road collection/delivery - can be a crucial factor in rail economics, particularly for shorter trunk hauls where rail is generally less competitive. One of Scotland's two remaining paper mills - at Irvine - is directly rail-connected already, and board mills at Cowie (Stirlingshire), Dalcross (near Inverness) and Barony (Ayrshire) lie close to existing rail routes, with scope to relay sidings.

We all want to see more freight on rail, and timber lorries continue to be a significant source of disruption to rural communities across Scotland. By collaborating on innovation and investment, the forest and rail industries and the Scottish Government can help to transform the role of our rural railways - realising the lessons from as far afield as New Zealand, Norway and Sweden that 'tourists and timber' are a winning traffic combination on Highland-type rail routes. 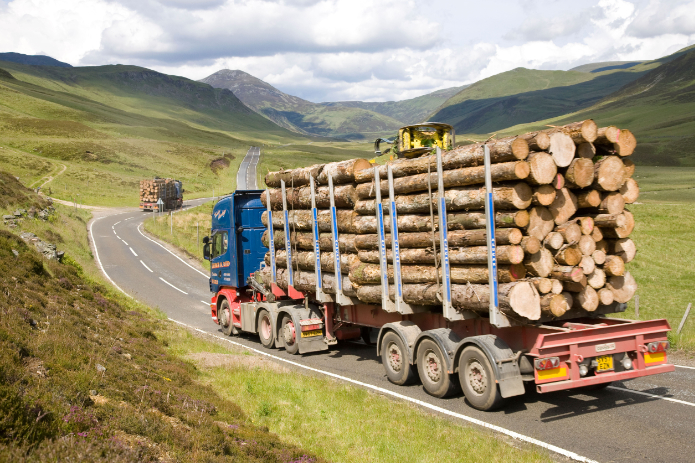 A93 in Cairngorms National Park. Great picture if you love lorries and beautiful scenery, but no way to transport timber. Wasteful of power compared with rail and extremely damaging to the roads, not to mention the noise pollution and general intrusive inconvenience to small communities.
MediaWorldImages / Alamy Stock Photo