This enterprise, based in the extreme south of Argentina, is the southernmost passenger carrying railway in the world. As such it makes a nice contrast with the Far North Line in Scotland. In fact these two railways, well over 8,000 miles apart could hardly be more different. The Far North Line is part of a national network, is of standard gauge, over 160 miles long and hauled almost exclusively by diesel traction of one kind or another. The Fin del Mundo line by comparison is an isolated tourist line, of less than two foot gauge, only 7 kilometres long and worked mainly by steam locomotives. It is however, a busy and popular railway, running 365 days a year through attractive scenery into the Tierra del Fuego National Park. High quality scenery is certainly one attribute that the two lines have in common. I was pleased to be able to visit the Fin del Mundo in November 2019 as part of a wider tour of Patagonia.

Around 10 kilometres east of the main station lies the city of Ushuaia, again the southernmost in the world. It is the only place of any size in the archipelago of Tierra del Fuego, cut off from the rest of South America by the Magellan Strait. The capital, Buenos Aires, is four hours away by air and many days by road. The city is of comparatively late foundation (1884) and has been an important naval base since then. The city grew quite rapidly in the late 20th century as the government encouraged settlement. It is very close to Chile both to the south and the west. Ushuaia lies on the northern shore of the Beagle Channel while the southern shore is Chilean, and to the west the National Park also borders Chile. Relations between the two countries have not always been cordial and in the 1970s war seemed imminent over territorial issues in the Beagle Channel. Today relations are stable and quite friendly but maybe not as close as Argentina's relations with other bordering countries such as Uruguay, Brazil and Paraguay. Readers may be aware that the warship General Belgrano, sunk in the Falklands War of 1982 was based in Ushuaia.

There are no difficult issues for British tourists today (unless perhaps they act with the kind of provocation shown by Jeremy Clarkson and his team in a famous jaunt for the TV programme Top Gear), but nevertheless there is no doubt that the Falkland Islands (Malvinas) are universally regarded here to rightfully belong to Argentina.

The history of the railway is much bound up with the Ushuaia prison. Argentina was not the first country to see a remote location as suitable for a prison for hardened criminals and the first convicts arrived in 1896 and were housed on an island named Isla de los Estados. This became regarded as inhumane and in 1902 they were moved to Ushuaia which at the time was still a small settlement. This new prison became established as the main one in the country for serious criminals, who were set to work constructing buildings, streets and bridges for little reward. The railway dates from 1910, eventually reaching the length of 25kms from Ushuaia westwards into the forest. It was principally used to transport the logs from the trees felled there. The prison closed in 1947 and two years later an earthquake in Tierra del Fuego provided a further blow to the railway, which limped on until 1952. The former prison is now a museum in Ushuaia and outside there is a locomotive and carriage used in the former version of the line. 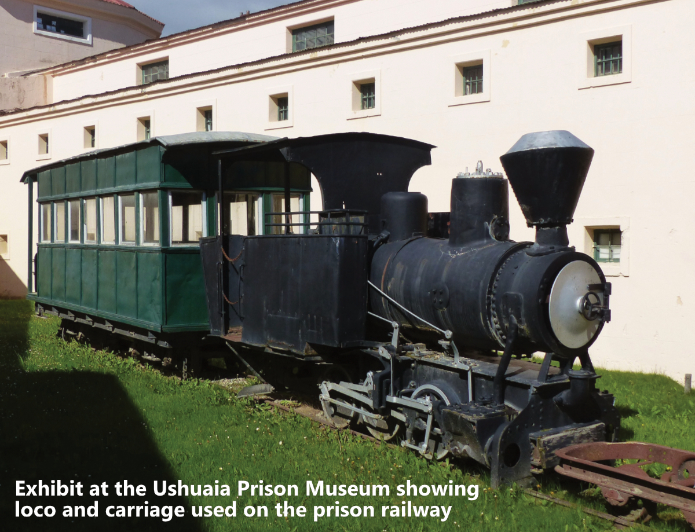 After some 40 years of dormancy, the most western part of the railway was rebuilt in 1994 as a tourist line of 500mm gauge. A 2-6-2 steam locomotive named Camila arrived in 1995, built in Britain, but I did not see this on my visit. I did see a diesel locomotive appropriately named Tierra del Fuego and two Garrett steam locos named Ing L.D. Porta and Ing H.R. Zubieta. Ing is short for Ingeniero, meaning engineer and Messrs. Porta and Zubieta were both Argentine locomotive engineers. While naming engines after engineers is fairly common place worldwide, in Argentina some towns, glaciers and many streets are also named after individuals. 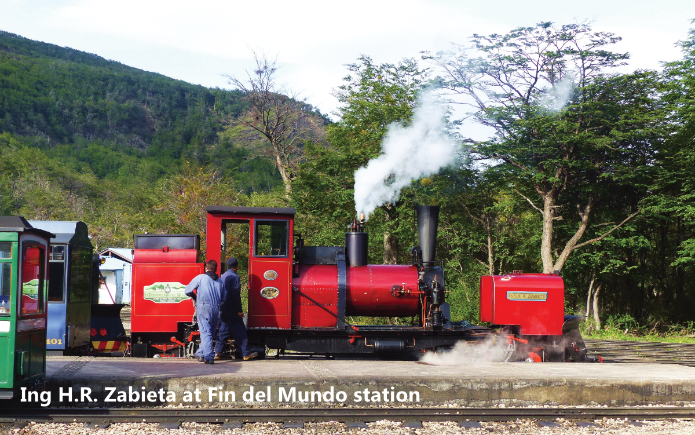 My journey on the train was, I think, typical of how the railway operates. The timetable suggested that there would be a train at 09:30 then two others later in the day. In fact there were three trains leaving at 15 minute intervals, at 09:00, 09:15 and 09:30. The journey is about one hour, and once all three trains had arrived at the terminus - El Parque station - they would then return at similar intervals. This of course requires considerable space at both ends of the line. I imagine that the same process would happen at lunchtime and in the afternoon. I was a little disappointed that our party travelled behind the diesel loco at 09:00, but that's life. I was able to get some fairly hurried pictures from the observation tower at Fin del Mundo station before departure, including photographs of the station and the two Garretts preparing to take the following trains. On the platforms meeting the customers were staff dressed in prison uniforms posing for pictures and of course providing opportunities to the visitors to purchase them later.

We left on time and proceeded at quite a sedate pace for about 15 minutes and then stopped at Macarena station. This gave passengers the opportunity to either visit a moderately impressive waterfall or see a reconstructed campsite of a type used by the Yamana people, one of the native tribes of Fuegans who used to live in the area. 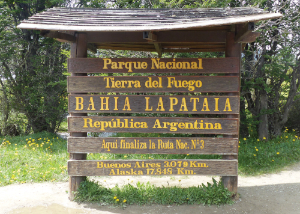 The journey then resumed and following the Pipo Valley, we entered the National Park. Visitors need to purchase a National Park ticket along with their railway tickets. This is not a great expense; currently the Argentine Peso is more or less in freefall and foreign visitors benefit from falling exchange rates. The scenery along the line is very pleasant and it is easy to see old tree stumps and areas of woodland deforested by the prisoners in the previous century. Having reached the end of the line at El Parque station our group returned to the waiting coach which had initially brought us from Ushuaia to the main station and then we pressed on further into the Tierra del Fuego National Park towards the Chilean border. There are many pleasant walks and spectacular views in the park and it is possible to see the end of the Pan American Highway which provides a continuous route from Alaska, almost 18,000 kilometres away. It is of course perfectly possible to return to the Fin del Mundo station by train if desired but many groups were following our schedule.

Judging by the numbers of passengers it appears that this railway is well placed to meet the serious challenges facing the whole Argentine economy. The two main excursions for visitors to this area are to sail on the Beagle Channel and to visit the National Park, and the Fin del Mundo Railway is well placed to benefit from those choosing the latter. Especially in summer, there is also a steady stream of cruise ships visiting Ushuaia providing many potential passengers. The fact that railway is open 365 days a year suggests that there must be considerable winter trade too. One source suggests that there is a possibility that the line might in the future be extended eastwards towards Ushuaia along the line of the prison railway. 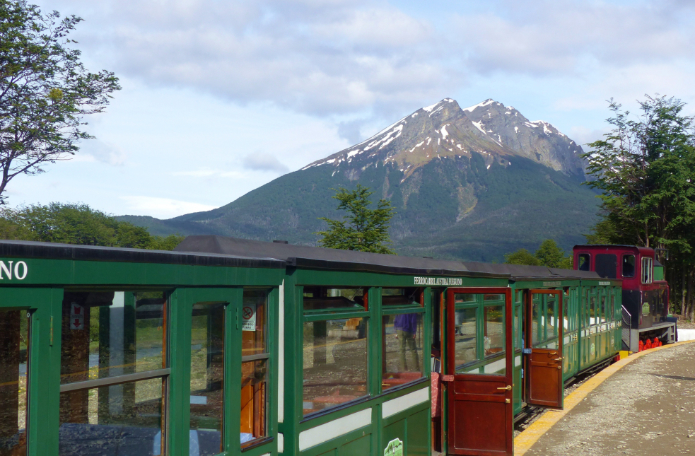 Larger versions of the photos and map in this article are available, along with some extra views, at www.fofnl.org.uk/fne80.php