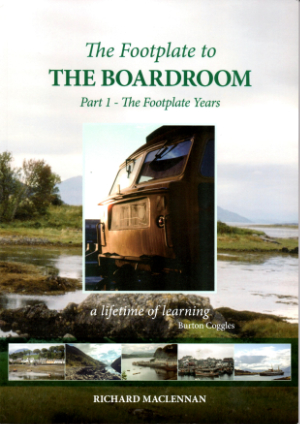 A decade of driver training in Inverness

Richard MacLennan. The Footplate to the Boardroom. Part 1 - the footplate years. 114pp. The author, Whitrope Siding, 2019.

This is a fascinating read covering 1980 to 1990, the first eleven years of the author's railway career on the footplate in Inverness and Ayr continuing briefly into the start of his staff training role further south. It will be followed by a second volume leading up to his appointment in 2005 as a board member at Chiltern Railways.

The 1980s were a period of rapid change and retrenchment on the railway. Steam heating, much of the freight traffic and double manning all largely disappeared and, in Ayrshire, DMUs were taking over. Richard considers the switchback line from Ayr to Girvan more difficult to drive than any in the Highlands.

He was trained first on the Class 26s in which he found the cabs much warmer and more comfortable than those in the successor Class 37s. The 37s initially had great difficulty coping with the autumn leaves on the FNL.

The first DMU which tried to invade the FNL is described in a choice passage.

"A tottering plastic nightmare arrived in town. 150001 was allocated to the 11:15 Wick service from 27 January 1986 with the trip booked to be single manned. The sprinter was struggling big time with the arduous task of running trains over this totally underrated route. The look on passengers' faces was priceless... no buffet, nowhere for mail, and no portion for Thurso. By Wednesday the thing was wheezing along on two engines and dropping time on every section. By Friday we were all royally sick to death of it. If this was the future, then God help us all."

Two weeks later, Richard was being trained by Jock Hay on the electric train heating Class 37/4 locos which were to take over from the "steaming" 37s. The disbenefit of single track is evidenced by the cold weather in early 1984 when The Clansman suffered complete freezing up of its air brakes when waiting passage on to the single line at Dalwhinnie.

Richard's journeys covered turns to Brora, Kyle, Aberdeen, Perth, and to former freight sidings at Burghead, Dufftown, Evanton and Invergordon. There are lots of stories about his comrades in the cab and even of scary events like fixing detonators in the dark on "The Hill" north of Struan. You will need to buy the book to read that one, a colourful (and well illustrated) book that you will find difficult to put down!