and the will to improve Highland connectivity

Improvements to our feeder routes into Inverness are vital to Far North Line traffic, both passenger and freight.

Time marches on. We are into the third decade since the 2008 Scottish Government strategy promise to reduce the rail journey time between Edinburgh and Inverness by 25 minutes to a 3 hour average.

The new timetable, which comes into force this month on 22 May, invites passengers to endure a service which only manages to achieve a 3h 38m average each way; seemingly an incredible 13 minutes slower than 14 years ago! Frequency has increased but rail timings are going backwards. All of this, at an average of only 50 mph, has to compete with the A9/M90 trunk road which continues to get quicker. There is still no commitment to replace the strategic direct Edinburgh to Perth railway, sacrificed in order to build the M90. That of itself would save another 30 minutes on the journey to Perth and consequently to Inverness. The May 2022 timetable shows five ScotRail direct trains each way. Previously there had been seven southbound. The fastest timings are 3h 30m southbound and 3h 24m northbound. The slowest are seriously unimpressive at 3h 48m southbound and 3h 51m northbound. LNER is to achieve 3h 19m southbound and 3h 34m northbound.

These timings show how Scotland's intercity provision falls far short of that in England. A train leaving Euston for Glasgow would be almost there in the time it takes to get from Inverness to Edinburgh - less than half as far.

The climate-friendly targets to reduce road traffic by 20% and to send much more freight by rail will not be met by further delaying the necessary work to improve the single track lines to Inverness. The strategic need to upgrade was recognised and promised by the transport minister in the parliamentary answer S3W-24784 to Mary Scanlan MSP on 11 June 2009 to implement priorities 3 and 4 of the Strategic Transport Projects Review of 2008. [See STPR2 article.]

If this had been done we would now have a head start in timetabling both climate-friendly passenger and freight services. The written answer includes enhancements for freight. 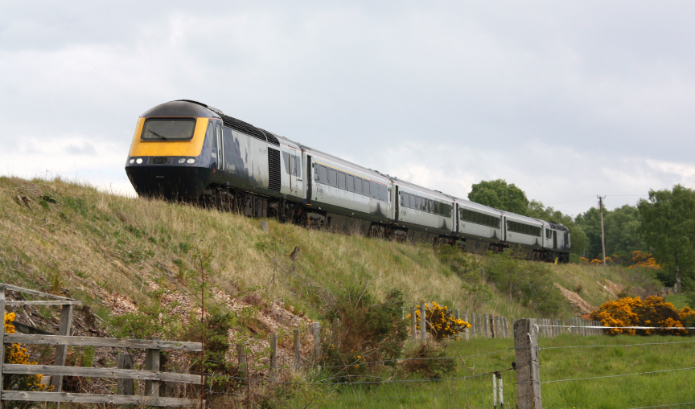 A similar disappointment arises with the strategic Aberdeen to Inverness line which was 4th priority in 2008 but is not even mentioned in the 45 recommendations for the 2022 Strategic review! [Three other corridor enhancements feature strongly]

The line is near capacity. Freight paths will be required for whisky and timber traffic and more paths are needed now for the proposed hourly passenger frequency and weren't there for the freight diversions when Aberdeen was cut off from the south by the two lengthy blockages at Carmont.

The 2008 promise of an enhanced hourly service, initially planned for the end of 2016, was to provide an average journey time of no more than two hours between Aberdeen and Inverness. The May 2022 timetable can do no better than an average 2h 17m westbound and 2h 19m eastbound, an end to end average of around 47 mph (with trains capable of 125 mph!).