Now that it's vital for all in the railway industry to focus on exactly how the modal shift demands of the Climate Emergency can be met, innovative thinking could come in handy. Here's an example from the beginning of this century. Taking a cue from the unsuccessful German CargoSprinter of 1996, a joint venture between Coventry University and TruckTrain Developments Ltd produced a promising take on the Freight Multiple Unit.

Each vehicle would have had a driving cab at both ends, unlike the CargoSprinter which had a motorised vehicle at each end with flat wagons in between. The TruckTrain would have been able carry standard containers, swap-bodies or pallets. Each car could have carried 40-60 tonnes and was designed to be formed into a train of 2-7 cars. Performance would have been similar to a passenger multiple unit, with a maximum speed of 100mph. All axles on each vehicle would have been powered to deliver the acceleration and braking required.

There would have been full on-board monitoring of location, vehicle condition, cargo condition and cargo security, along with automatic communication to the shipper's base.

This project appears to have foundered, but in the new situation where almost everything currently carried by lorries needs to be looked at for potential transfer to rail, it is easy to imagine such a train providing a useful service where smaller consignments could easily be combined.

However, all new freight developments will have to be based on overhead electrification, supplemented by batteries for non-electrified sections of route. This will represent quite a challenge for the designers FoFNL hopes are beavering away on something like this. Perhaps a three-car unit would be a necessary compromise. 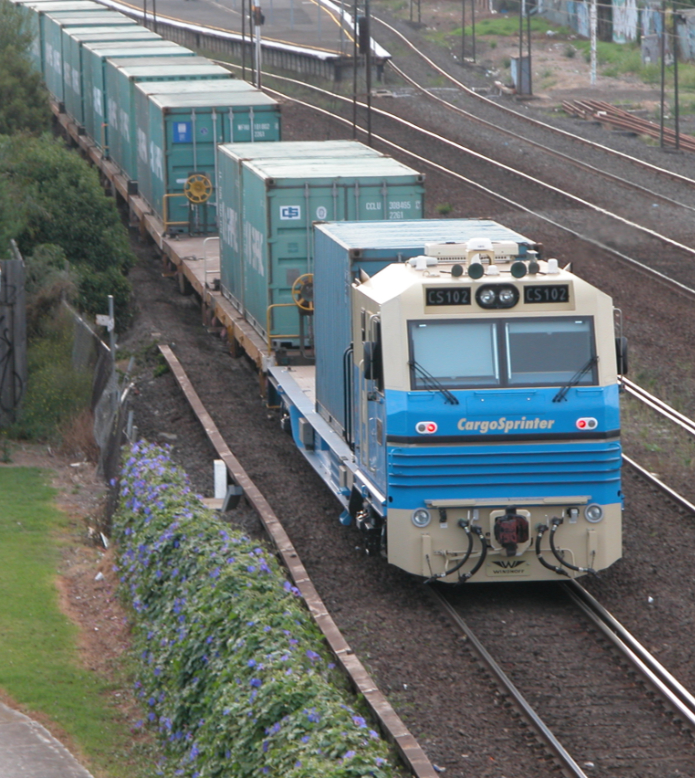 A CargoSprinter unit was ordered in 2001 from the German manufacturer, Windhoff, by the Australian CRT Group. It is seen on 6 February 2004 on a dual-gauge (4'8½"/5'3") section between Middle Footscray and West Footscray stations, heading west out of Melbourne. A tri-weekly service from Melbourne to Wodonga ran for a while from 2003.
Photo: Dermis50