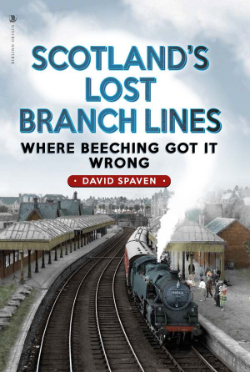 This is not a book of reminiscences about the good old days or the "Golden Age of Railways". Far from it, David Spaven analyses the reasons used for the Beeching closures, and the processes and their participants in great depth, making it a thoughtful and thought-provoking volume. Reading it, one is filled with a feeling partly of anger, but mostly regret. Politicians and planners in the early 60s almost universally had no concept that they might be wrong about the future of transport. The few exceptions, including importantly David's father Frank, expressed views which must have seemed surprising to most at the time. That railways are not profit-making entities but often address social need and foster economic development, was not in most people's thoughts. Nor was the concept of safeguarding the closed railway routes understood by more than a few, who knew that they might be needed in the future, but were completely ignored.

This is a careful and deeply researched look at what happened: the sheer incompetence with which the whole process was handled is very disappointing, and almost none of the participants deserve any credit.

The wilful disregard of opportunities to run the threatened routes more economically, instead of complete closure, is shocking, especially as one of the most guilty parties was BR itself, which seemed to be intent on a massive act of self-harm.

This is a very readable account and David brings in other eminent commentators, such as David Prescott, Rae Montgomery and John Yellowlees, throughout the book, to give their own angle on particular decisions.

Scotland's Lost Branch Lines is in two parts: Part One, The birth, life and death of Scotland's branch lines, is a wide-ranging study of the history that led to the railway system in Scotland.

Part Two, A dozen closures dissected, is a detailed narrative of the closure process of selected lines and shows, among other things, how the BR staff who actually operated the railway were mostly far more knowledgable than those who managed it.

The final chapter contains careful analysis of what part rail could play in the future on the routes whose closure was examined in detail. Acknowledging that a good solution in some cases might be light rail, i.e. TramTrain, David reflects on the possibilities this might hold for bringing certain sizable communities back into the rail system, where full reopening for 'heavy rail' might have a prohibitive price tag. This would make useful reading for those in charge of the railways in Scotland today, and the politicians whose understanding of such things is essential.

The story is illustrated with many excellent photographs - some featuring the author himself when a little younger!

I recommend this book for anyone who has wondered what really happened when the "Beeching Axe" was wielded. It's very easy to blame Dr Beeching for everything, but Scotland's Lost Branch Lines shows that the guilt should be shared far more widely.