"Dave, Dave, do you know - they're going to burn the Ardgay Signal Box? They've smashed and burned the boxes in Tain and Dingwall; Ardgay is next." This anxious call from a friend in Tain was enough to send me scurrying down to Ardgay to check the situation. This was February 1992. Radio signalling had been introduced on the north line and proved to be successful thus rendering the old mechanical signal equipment redundant, so the fate of all the signal boxes was to have the roof smashed open, the lever frames hauled out, then the wooden shell was set alight. This was British Rail's dismissal of one hundred years of Highland railway history. What to do about it? 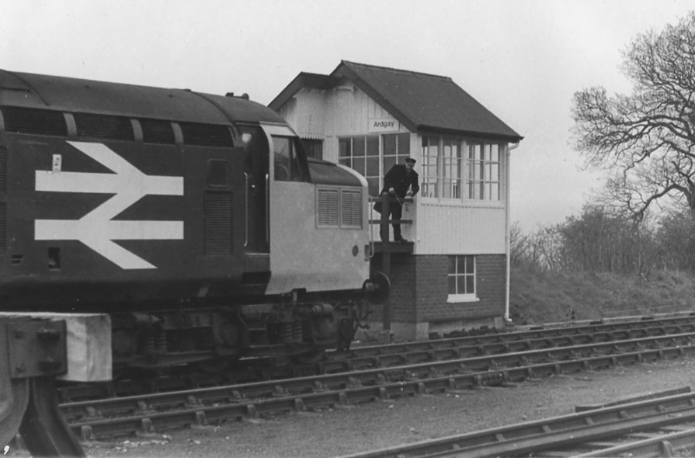 The Ardgay box had been given a temporary reprieve by turning it into a workmen's bothy, the lever frame dispatched to the National Railway Museum in York and a new floor laid for the linemen to sit on. However, all those small windowpanes proved too much of a temptation for kids with missiles, so the railway men hardly used it and British Rail went back to plan A. 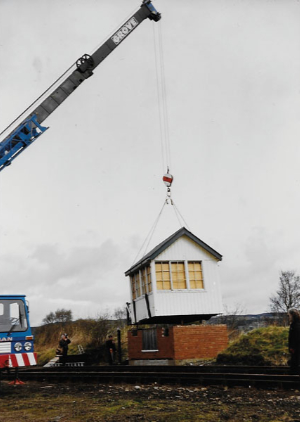 It took a couple of phone calls for me to be granted an audience with the Royalty of Her Majesty's Railways at Inverness station but after a bit of statutory manoeuvring we had a deal. The Ardgay signal box was mine.

The move was scheduled for a Sunday in April when there were no trains. I would hire a crane and a flatbed lorry from Bannermans and we would transport the box by road to my home in Rosehall. The police would escort the circus as it would be a wide load on the single track A837 and BR would provide a flagman to warn any rogue trains that had slipped unnoticed on to the line while the Inverness Station Master's back was turned. I was to pay the flagman's wage for this vital Sunday workload. 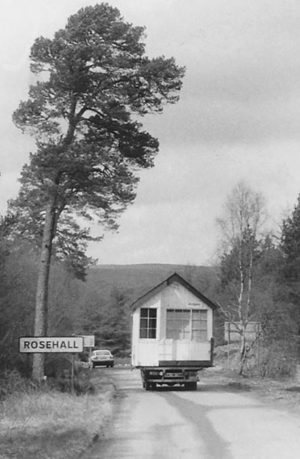 With the help of a couple of builder friends I prepared the box for its airborne adventure and subsequent excursion, all set for Donnie the Crane to lift it from the plinth and thus start the procession to Rosehall.

It was a little like the conclusion of Peter and the Wolf or Carnival of the Animals. First the police car to frighten oncoming traffic into passing places, then the crane looking like some iron dinosaur pursuing the police car and following that was the flatbed Scottish Scampi lorry with the pride of Ardgay riding high through the trees. Then came the car carrying a rather nervous Dave and family followed by a van containing the helpers who would re-site the box onto its new plinth at Monument Wood, Rosehall.

The small car park at the house necessitated a bit of creative manoeuvring by the two large vehicles. Side by side whilst the box was lifted, then the truck withdrew and 'Ardgay' was placed on the ground till the crane was in position to lift and fit it onto its new temporary plinth of railway sleepers, helped into place by what seemed to be half the population of the village. 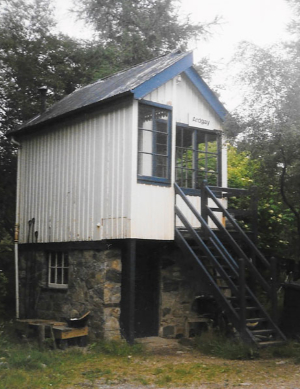 The next few weeks saw the building a new stone base (the original had been brick). Stone was cheaper and I sort of understand it better than brick. Sixty-three new panes of glass had to be cut and fitted but word had spread that Dave was looking for glass and there seemed to be a daily drop off of old glass by people I didn't even know. (Thank you again if you are reading this.)

The original steps and outer deck had deteriorated so were replaced. I had to construct my first set of wooden steps but I did have the old ones to copy. New paint in ScotRail blue and white, then all was ready for the one hundredth birthday in 1994 with the lower door wide open to show the signatures of the porter-signalmen from 1919. Bowler hat and bow tie for me, period dress for friends and family, then Lily Byron cut the tape and all retired for drams upstairs. I hadn't told anyone that I had wired up a pair of speakers hidden away under seats with a tape recorder downstairs. The relaxed company heard a distant whistle followed by a steam train rushing past in glorious stereo. I enjoyed that.

There are a couple more pictures on the companion page to this issue.

100 years old - useless now, condemned
to be hanged, drawn and quartered,
limbs and guts removed and shown
for all to see.
Even your windowed eyes smashed
by urchins.
Then you will be burned.

Your contemporaries, Dingwall and Tain,
[already broken,
consumed by fire and now part of history.
Books will be written for
and by the faithful.
But you will be ashes; the executioners
are already starting work, so prepare.

But what is this? Reprieve or rescue
shackles shaken clear. You are lifted
high and placed secure
on the getaway vehicle, trundling
along the A837
to green woods
and quiet air, standing high
again, eyes renewed
colour restored,
new bowels with lovely heat
and light.
No longer by the lineside
watching trains go by,
controlling points.
Dignity regained
you are retired.

Article originally published in the Kyle Chronicle in March 2022 - reprinted with permission.