Once the Queen Mother purchased the Castle of Mey between Thurso and John o' Groats in 1952 it became more common to see the Royal Train on the Far North Line. It became something of a Royal Route.

Files in the National Railway Museum (yet to be studied) give some details of such trains in 1957, and in early August 1958 and 1959. The Queen Mother would be met by car at Georgemas Junction.

The Royal Train was usually kept at Wolverton near what is now Milton Keynes. In August 1955 the Wolverton train was cancelled and the Scottish Region had to provide the rolling stock from Inverness to Wick. FoFNL member John Macnab, who worked on carriage diagramming in Glasgow remembers a similar occasion some years later: "My minor involvement concerned a moment in time in the early 1960s when we in Glasgow North were informed that the Queen Mother was travelling back from an evening engagement in Glasgow on the timetabled overnight Glasgow Queen Street-Inverness service requiring us to make available one of our BR Mk1 sleepers for this purpose. The Cowlairs cleaners at the carriage sheds set to but were not told who it was for. Curiosity got the better of these cleaning ladies (somewhat tough in demeanour) and the boss one asked (nay, demanded) of myself and the inspector on our calling in to see how things were going, "Wha is this fur onywey?" We hesitated but took the plunge and said it was for the Queen Mother. Both of us expected an outcry of "Whit!" but, somewhat surprisingly. the reply was, "That's awright then." I rather imagine there was a genuine generational fondness for the Queen Mum stemming from WWII days.

So far so good! Until on finishing the task the steam heating was tested and the isolating cock at one end was unfortunately still closed and, yes, the pressure blew the main heating pipe! What to do? Only recourse was to get an LM car from Larkfield post haste to Cowlairs and start the cleaning and equipping all over again! (Expletives deleted!). In summary, it took until early evening to have everything in order and marshalled into the train set. Phew!"

Iain MacDonald remembers an occasion from the operating point of view when things nearly went wrong: "In the days of token block working the Royal Train had to have two sections clear ahead of it instead of the normal one. If trains were going to be crossing on single lines the other train had to have already been stopped in the loop ahead before the Royal Train could leave the previous loop.

A staff member had to be stationed at every level crossing ahead of the Royal Train to physically prevent anyone trying to cross the line. Royal Trains had to carry two tail lamps instead of one, in case one failed.

In Radio Signalling (RETB) days a supervisor had to be in the signal centre when a Royal Train was running and the signal centre was security checked in advance. There would be a Traction Inspector in the cab supervising the locomotive train crew.

However, on one occasion the driver of a Royal Train (which was carrying temporary RETB equipment) phoned in from Forsinard to say he couldn't get a signal. I asked him where the aerial was and he said, "It is beside me". I had to gently tell him that it is meant to be attached to the outside of the locomotive!" 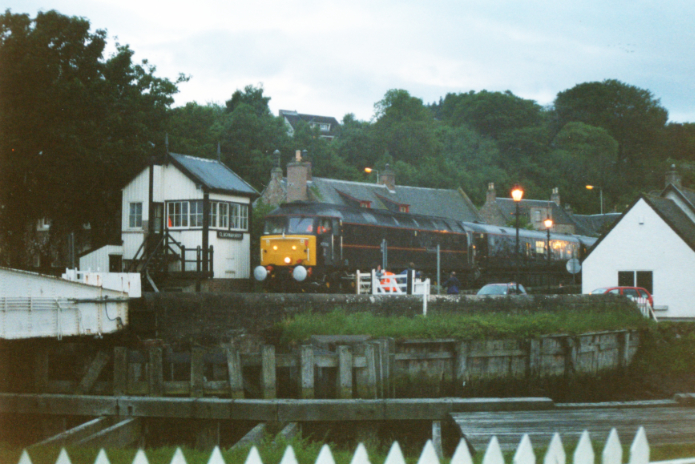 Two of the last occasions when the Royal Train was on the line were on Monday 27 May 2002 when HM The Queen had engagements in Caithness and on 26 September that year when the Prince of Wales boarded at Lairg.