It is wonderful that the two year construction programme to redouble the 16 miles long Aberdeen (Hutcheon Street) to Inverurie stretch of the line was completed on schedule and that through trains were reintroduced on 20 August. From the December timetable, train services between Aberdeen and Inverurie will increase from 45 to 76 each weekday and there will be no more waiting for late runners to clear the only track ahead. The tall lighthouse-like structure which was Dyce Junction signalbox has been demolished. The new modern signalling (now controlled from Inverness) is as important as the new track in facilitating all these extra trains. Well done to all involved!

Kintore station is in the process of being built to open in May 2020. Further good news concerns the future Inverness Airport (Dalcross) station which will now have two platforms and a passing loop from the outset. Transport Scotland will be applying for new planning permission. It is hoped the loop will be long enough to stretch as far as the recently extended Norbord wood plant to enable logs and finished product to be carried to and from their door, not least the timber from the FNL at Kinbrace and Georgemas.

Hopefully that will still leave more paths for freight trains than we have at present. There is considerable scope for Scotland's railway to carry food and drink traffic (including bulk spirit) from Elgin and/or Keith in particular. A Government working group is about to begin meeting to progress this. It is also possible that timber traffic could be seen on this and other lines again.

This and the enhancements needed just for the promised hourly frequency for passenger trains with the target of end to end journey times reduced to two hours, or less, indicate substantial extra capacity is required. The need to cater also for the extra freight paths and the prudent provision of some diversionary paths for freight and for the Caledonian Sleeper underlines the serious constraints we were already under, even before the declaration by the First Minister of the Climate Emergency. 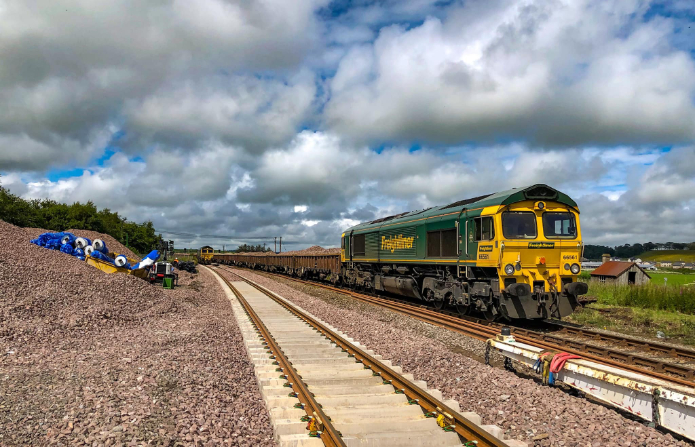 66561 and 66557 on ballast trains for unloading at Inverurie on 10 July. The photo was taken by Jordan Kearney, one of the locomotive drivers

It is reasonable to expect that the doubling towards Inverness from Dalcross will be announced for early in CP6. There are other pinch points, but the main one thereafter is to provide more capacity either side of Keith. A dynamic loop of several miles is needed in the Orton area to break up the 18 mile long single track section between Elgin and Keith, and Keith station needs to be provided with another platform so that trains can cross there rather than delaying alighting passengers in the loop further on. It is incredible that this main line between two of our cities still has an 18 mile section which is single track.

There is a lot of work still to do and the Climate Emergency makes it even more urgent.