Having successfully completed the installation of CIS (Customer Information Screens) at all stations on the Far North Line, progress is now being made on improving the system.

Currently the CIS use a combination of fixed link and mobile connectivity. The SIMs used where a fixed data link is not provided are configured to connect to the best available mobile signal.

The CIS at 26 stations on the Far North and Kyle Lines are being upgraded to IP (Internet Protocol) using ADSL (Asymmetric Digital Subscriber Line). The remainder cannot be connected to the telephone network so will have to continue to use mobile signals.

Culrain and Kinbrace are solar-powered, all the rest are connected to the mains.

Information displayed on the screens is provided by a system called Javelin RT - real time data distribution - which in turn receives a constant feed from the rail industry's central train-running information engine, Darwin. Unfortunately Darwin receives information about the whereabouts of trains via the signalling system and track circuits, not used with the RETB (Rail Electronic Token Block) system in use on the FNL. This therefore requires the manual input of train location by the RETB signalmen.

Due to the vagaries of the weather, the CIS which use mobile signals will sometimes go offline (as can the connected ones). The screens are pre-loaded with the line timetable and are configured to automatically show the next trains according to the timetable if they lose their connection. Trains cease to be displayed three minutes after scheduled departure time and the subsequent train is later displayed. In the position where "On time" or "Expected xx:xx" are normally displayed a disconnected screen will show "Timetable" to indicate this. Currently it is planned to change "Timetable" to "Use helpline".

The CIS for Scotland are managed from the ScotRail Alliance Integrated Control in Cowlairs in Glasgow. The person monitoring the screens can query each one to see if it is connected to the data feed. Unfortunately there is no automatic notification from the software that a CIS is offline, but drivers and conductors are aware that they should report any CIS which they see has 'defaulted'. 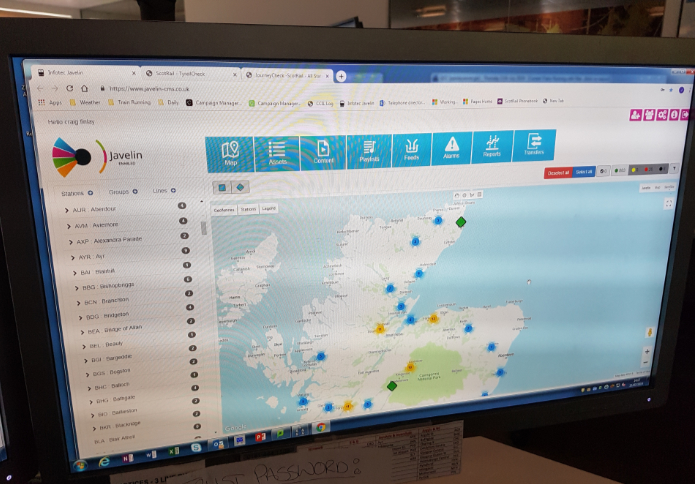 All CIS in Scotland are monitored at this workstation in Control

The current default state for CIS is that the next train is only displayed from one hour before it is due. FoFNL has made the point that on the FNL, where there are such long gaps between trains, it would be a source of comfort to intending passengers who arrive early at the station to check the service, if the next train were always displayed.

The presence of a unified provision of CIS across all Scottish stations is clearly an important step forward for passengers.