There was welcome press coverage in July of the Thurso-Wick shuttle proposal:

Caithness would be the ideal place in Scotland to trial a short-range rail shuttle using battery-powered trains, according to a lobby group.

The business case for the service between Wick and Thurso is being fleshed out after the idea won the support of a senior official of green-friendly train maker Vivarail.

A direct scheduled service between the two towns was last operated in the steam era.

Interest is being taken forward by Friends of the Far North Line (FoFNL) which is keen to boost traffic on the line in Caithness. It believes the drive away from diesel engines to renewable forms of energy can be a major factor in getting the service under way.

Backing came from Vivarail at FoFNL's recent annual general meeting when marketing head Alice Gillman suggested there is potential to use one its Class 230 battery trains on the inter-town shuttle service. With a range of 60 miles, it could make three runs before it needed to recharge.

Ms Gillman said it could draw on the energy produced from the MeyGen tidal energy scheme.

Frank Roach, of HITRANS, said: "This seems to us a no-brainer as long as it is something people would use and there are already good indications of interest from local residents."

"We're currently investigating the business case for the service, just how it would operate and what we would need at either end."

Mr Roach said the service would be an ideal way to soak up some of the fast-mounting supply of renewable energy being produced in the far north.

Apart from the tidal energy, he referred to plans to turn Thurso into a battery storage hub on the back of the two firms with bases in the town. One of them, Denchi Power provided the lithium-ion batteries that powered Britain's first hydrogen fuel cell train launched at the Rail Live 2019 exhibition in Warwickshire last month.

Mr Roach said: "There is a commitment to phase out diesel trains, but outlying rural routes like this aren't going to get electrified, so we need to come up with new solutions like this."

"We believe that Wick - Thurso is the ideal length of route and location in Scotland if you want to experiment with this sort of initiative."

Electricity produced at the MeyGen tidal energy scheme in the Pentland Firth could be used to power an experimental battery train between Wick and Thurso. That is the hope of rail campaign group Friends of the Far North Line (FoFNL) which claims Caithness would be a good place to test the technology.

The proposal has the support of HITRANS - the Highlands and Islands Transport Partnership - and rolling stock manufacturer Vivarail, which produces new trains from ex-District Line stock from London. The original electric motors and bodyshells are kept, a modular power supply system is installed and the interiors are redesigned to meet operators' requirements.

FoFNL which wants to see more traffic on the far north rail line, thinks the scheme "ticks many boxes", although it is still in the very early stages. Mike Lunan, a committee member, and former convener of the group, thinks Caithness would be "admirably suited" for such a test.

As the journey between Wick and Thurso is just over 20 miles, he said, the train could make a return trip before needing the battery to be recharged. Mr Lunan, who lives in Thurso, said there is a surplus of energy being created in the far north and it could be feasible to use electricity from the MeyGen scheme to power the battery-operated train. The idea was mooted at the FoFNL annual general meeting.

He said funding for the three-year trial could come from Transport Scotland and would not be "a huge amount of money" in railway terms. ScotRail could also be interested in the experiment as it is keen to phase out diesel trains on some branch lines. It would not be economic to electrify them but an alternative could be to use battery power.

These items in the press inspired an anonymous author: 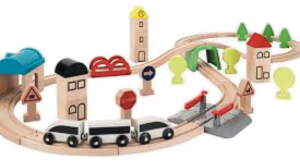 Once upon a time there were three Wise Men called Adrian, Alex and Bill. Adrian had a little train. He hadn't always had the train - it had belonged to somebody else, but they didn't want it any more, so he said "please may I have your train?" and they said "yes, here you are".

Adrian made the train all nice and new, and he wanted to find a place for the train to run up and down. Alex had lots of trains, and lots of people to drive them and look after them, but you can never have too many trains, so when he heard that Adrian's train wanted somewhere to run up and down he said, "I know the very place. It's a long, long way from where the train used to go when it was new, but if someone will bring the train to the special place I will look after it and it can take people in it for journeys, just like it used to".

But none of this was going to happen unless the third Wise Man, Bill, said that it would be all right. Bill knew that the people who looked after the train and drove it would need to be paid, and the train would have to be fed with special train-electricity, and although it wouldn't need a Very Big Bag of Money it would still need a Little Bag, and even Little Bags don't grow on trees. Bill sat down and thought really hard. He so wanted to see the train going up and down, full of happy smiling people.

Adrian said that he would let Alex play with his train, and he wouldn't want any money at all! Bill thought really really hard again and said, "Very well. Here is a Little Bag, Alex, tell the train it can come up to Caithness and go up and down all day to its heart's content.

And Adrian, and Alex, and Bill, and all the boys and girls and their mummies and daddies loved the little train, and they all lived happily ever after.