FoFNL was given the opportunity in June to visit Brodie Engineering's works in Kilmarnock where the five Class 153 single-coach units are being prepared for use on the West Highland, Kyle and Far North Lines.

The units are being stripped out to provide 20 bike spaces as well as a seating area and space for other larger items such as skis.

We were shown a test version, in one of the units, of what will probably be the final configuration of the bike storage area. This is the result of some very inventive design work to make sure that every bike is easily accessible at stations en route and yet is securely held in place.

These carriages will be attached to some existing services and will give a massive boost to the cycling-related travel on these lines - we think the FNL "end-to-enders" will be delighted!

Unfortunately the latest thoughts from ScotRail are that they may deploy all the units on the WHL initially, for operating reasons. In any case, the experience gained in designing the active travel units will be invaluable when it comes to specifying whatever bi-mode trains replace the ageing 158s - sooner, rather than later we hope!

The Class 153 units were originally built in 1987/8 as Class 155 two-car units, by Leyland Bus in Workington. In 1990 British Rail awarded a contract to Hunslet-Barclay in Kilmarnock (now Wabtec Rail Scotland) to convert 35 two-car units into Class 153s.

STOP PRESS! At a recent stakeholders meeting to discuss progress and deployment of the Class 153 units we found out that they will not be used on the Far North Line. The intention now is to run a 'pilot' on the West Highland Line although we were told that the FNL hasn't been "forgotten about". 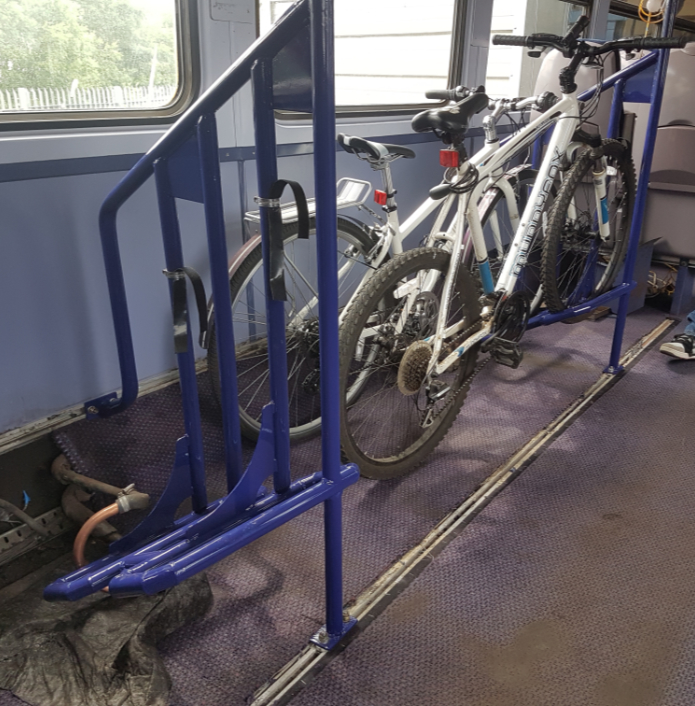 This mockup shows accommodation for four bikes. It has been tested with very many types of bicycle, including tandems.

The front wheel rests in a 'caddy' which slopes towards the outside of the carriage using gravity to ensure a stable resting position.

The space next to the window is accessible by simply lifting the rear wheel of the neighbouring bike and pivoting it out of the way, while the front wheel is resting securely. The ease of doing this was demonstrated to us.

The exterior design shown above is a ScotRail 'concept' and may not be the final livery.